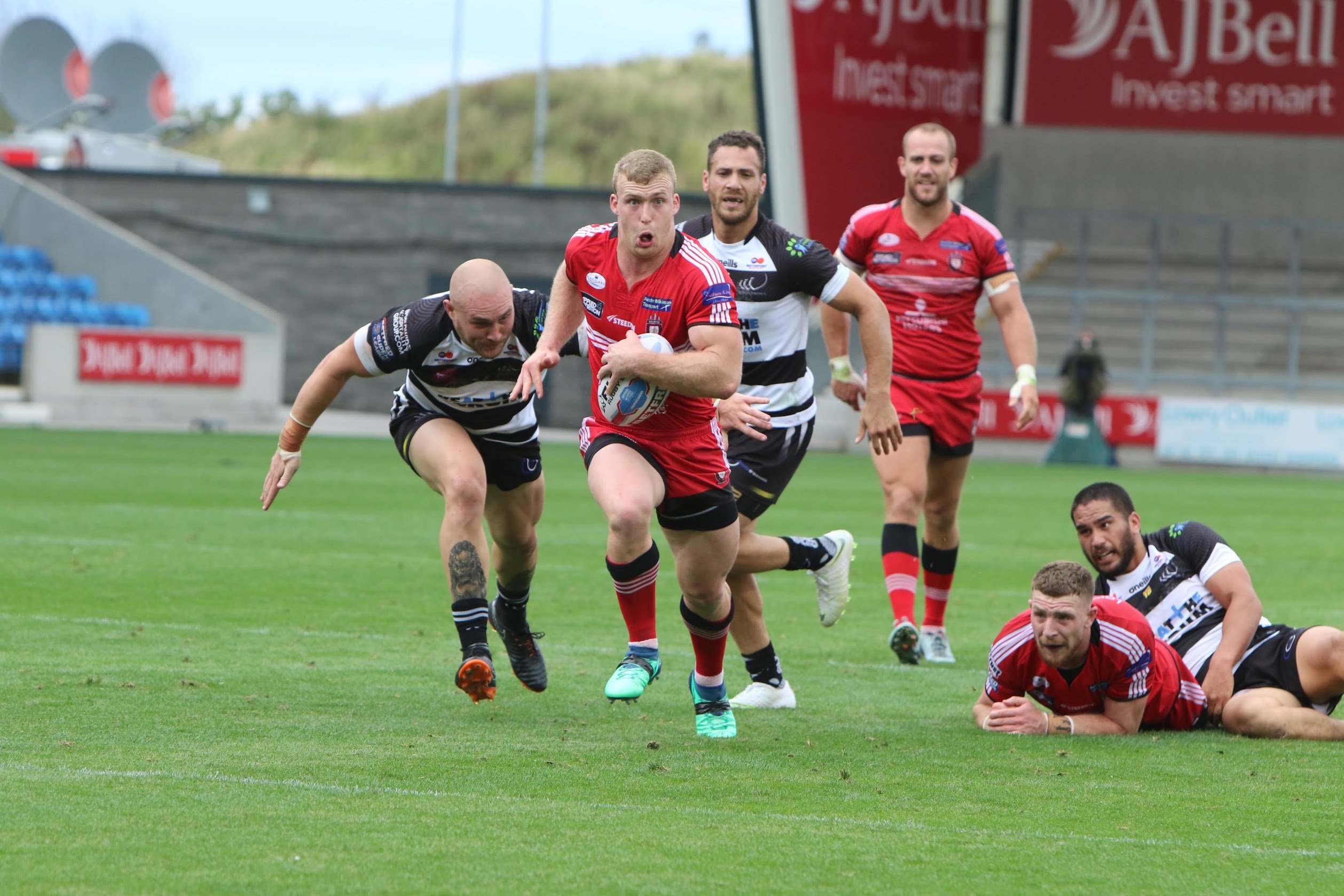 Joey Lussick gave an exclusive interview to Salford Red Devils TV following his signing for another two seasons at the AJ Bell Stadium.
Lussick, sponsored by Capricorn Security, discussed his period with the Club throughout The Qualifiers, the reasoning behind his decision to stay at Salford Red Devils and an upcoming pre-season in British winter.
Watch the full interview here: 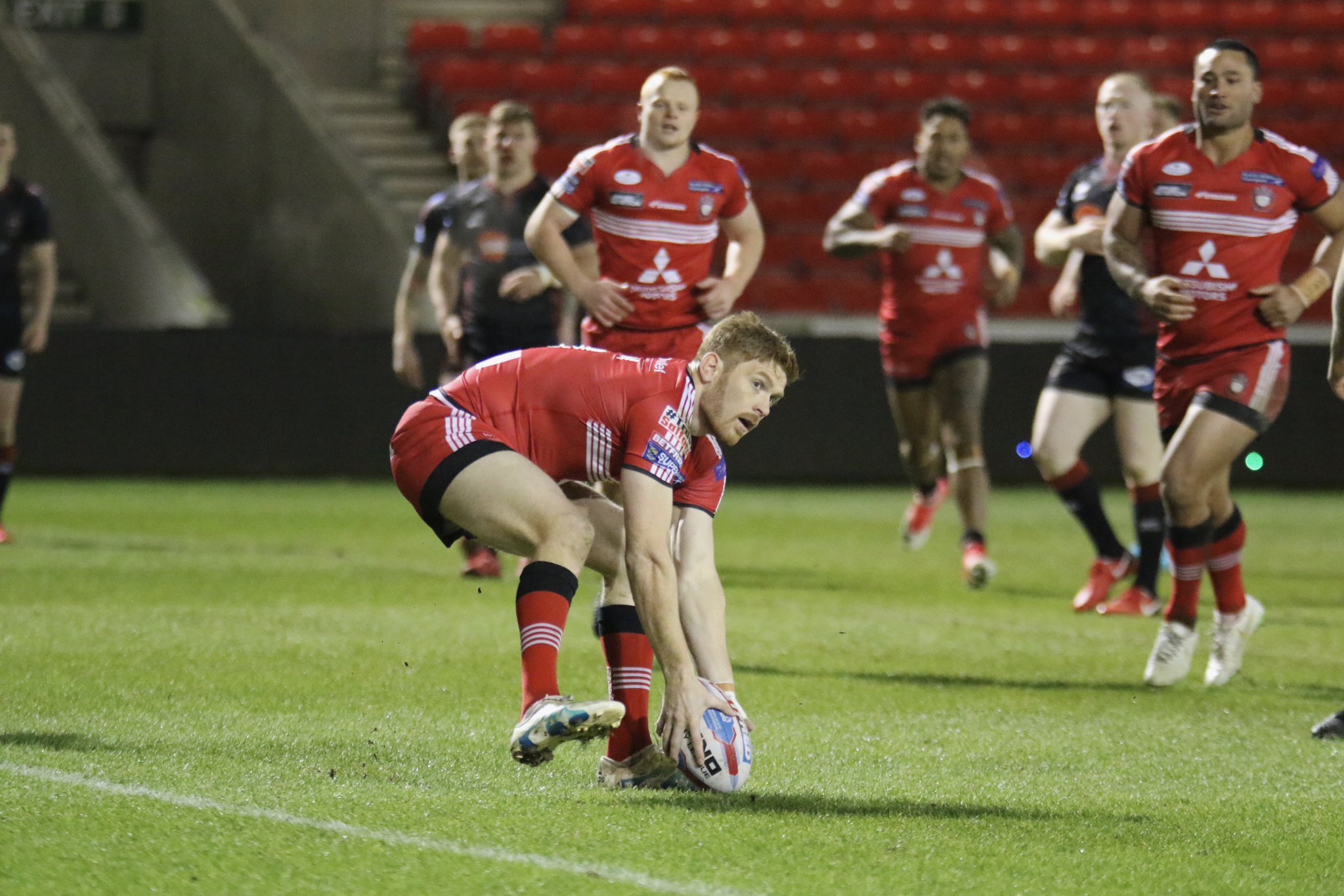 Kris Welham was delighted to return to action a fortnight ago against Widnes Vikings and is now focused on getting another two points this weekend against Halifax RLFC.
The Red Devils have already earned two wins so far in The Qualifiers and the veteran feels Salford need to be aiming for an unbeaten campaign.
Welham, sponsored by Process Gas Services said: “With the team that we’ve got – we finished 4th in the Betfred Super League regular season last year – so there’s no reason we can’t try and win seven from seven.
“We’ve had our fair share of injuries throughout this season but we’ve come past that now and we’re confident we can win all seven games.
“We’ve got a good team and some experienced players and we just need to earn another two points this weekend.”
Watch Kris Welham’s full pre-match interview below: 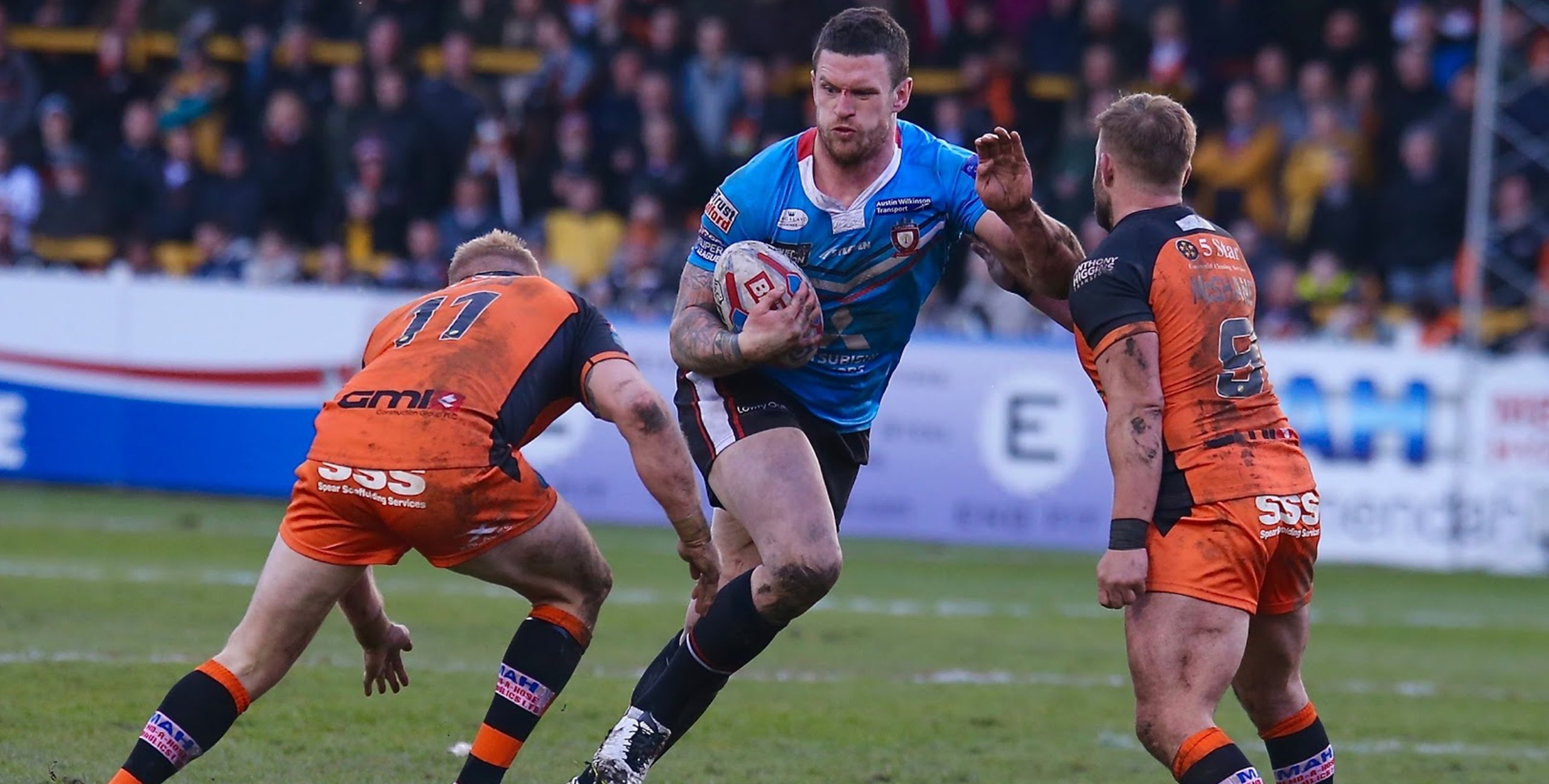 Head Coach Ian Watson has named his 19-man squad for Sunday’s trip to the MBi Shay to take on Halifax in the Red Devils third Qualifiers fixture.
Luke Burgess returns to the squad following a lay-off with a knee injury and could be in line to play his first game since defeat against Wigan Warriors on Friday 4th May.
Tyrone McCarthy also returns after missing the victory over Widnes Vikings a fortnight ago. Daniel Murray is also named in the 19-man squad. Greg Burke retains selection after making his return to the team against his former side two weeks ago.
Kris Welham also retains his place in the side following his return from injury last time out and you can listen to what the centre had to say about this weekend’s game below. 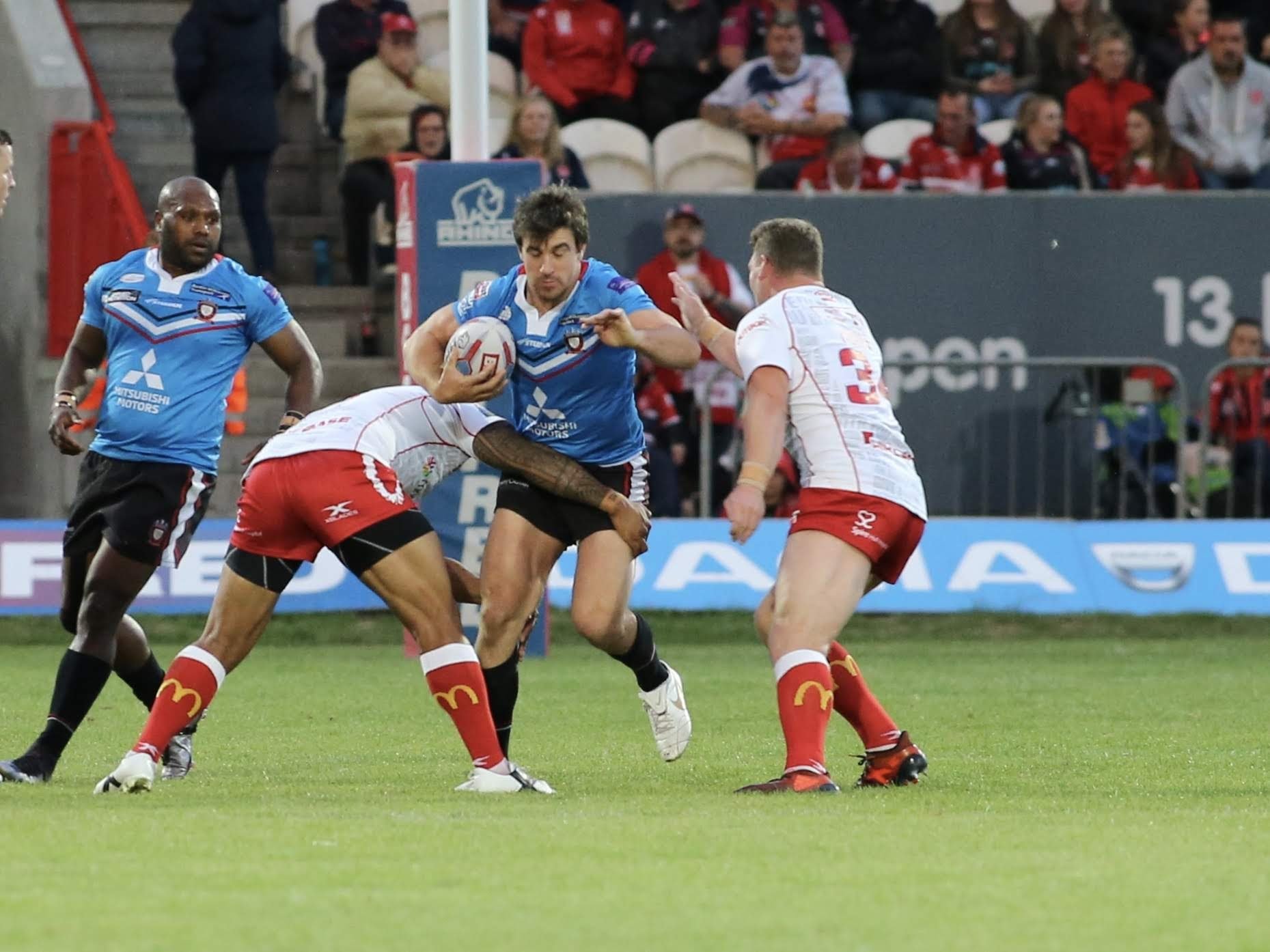 Salford Red Devils forward Tyrone McCarthy admits confidence has lifted at the Club in the past few weeks and the victory over his former side Hull Kingston Rovers will only further that.
McCarthy, sponsored by Arlec Property Services, said: “It was a huge result for us to start these Qualifiers.
“Obviously, we came to Hull KR a few weeks ago and got a number put on us so it was good to come and put things right.
“Wins are vital in this competition and it’s just about us securing our place in the Betfred Super League next season.
“I think after our last game against Leeds it’s just about building confidence and I think there’s a great energy around the Club at the minute with the new boys coming in.”
Watch Tyrone McCarthy’s full post-match interview with Salford Red Devils TV below: 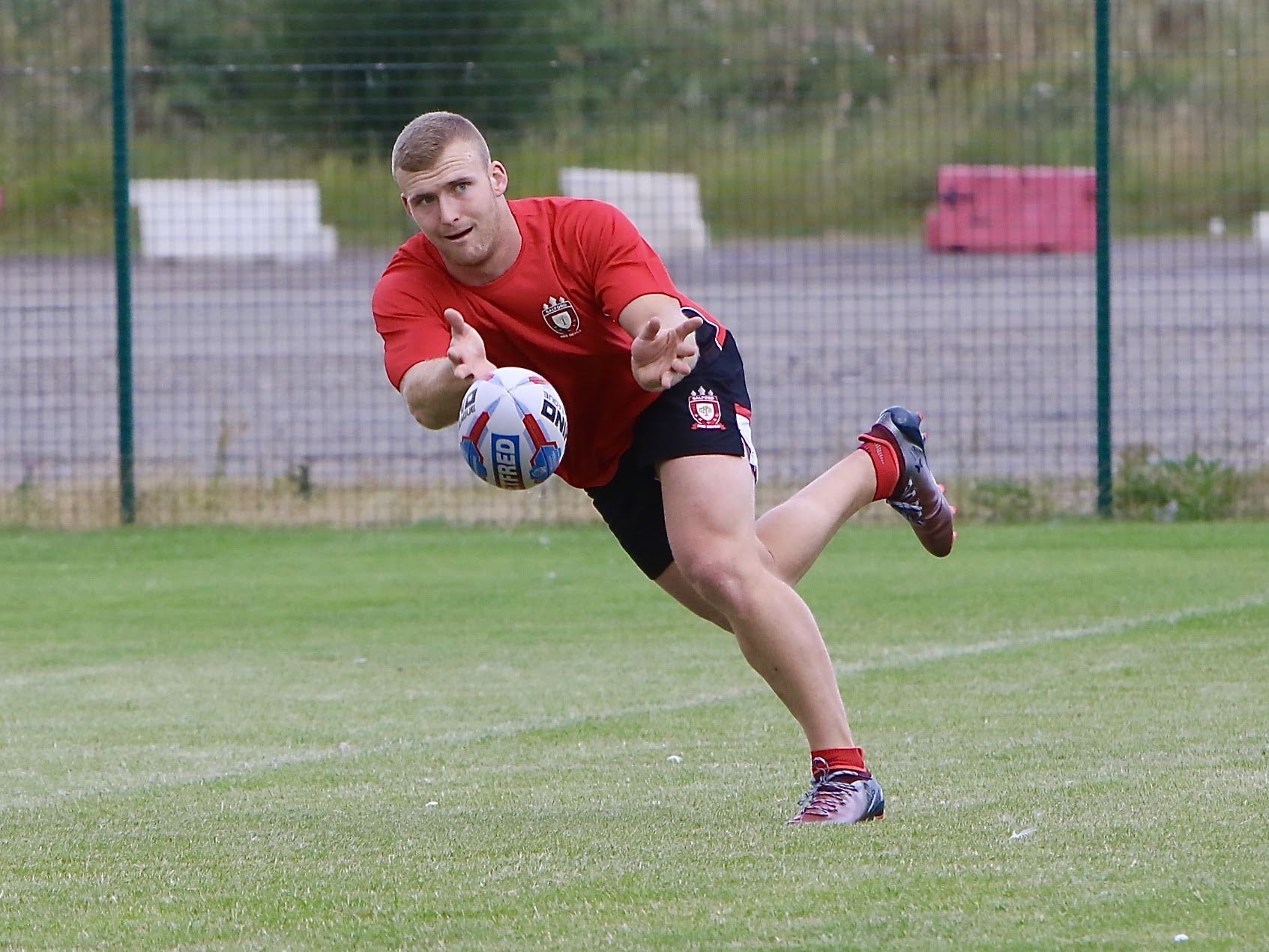 Australian Hooker Joey Lussick is in line to debut against Hull Kingston Rovers in the Red Devils Qualifiers opener and can’t wait to get out on the field now he has settled in.
Lussick, who is available for sponsorship, said: “While the Qualifiers are on I just want to get in, play my best performances, keep improving as a player and do my part for the team here at Salford.
“Hopefully we can take care of the eights and move on and potentially go again next year.”
Lussick arrived at the AJ Bell Stadium prior to the Ladbrokes Challenge Cup semi-finals meaning he’s had an extra week to settle in with housemate Jackson Hastings and get to grips with his other teammates.
He said: “The week off helps, an extra week of training, an extra week to get combinations, extra week to get things done with the boys.”
“Me and Jacko [Jackson Hastings] have been good friends for a couple of years now so it definitely helps him getting here a couple of days ago so he sort of found his feet too so it’s good to have a mate here to help me round.”
Watch Joey Lussick’s full interview with Salford Red Devils TV below: 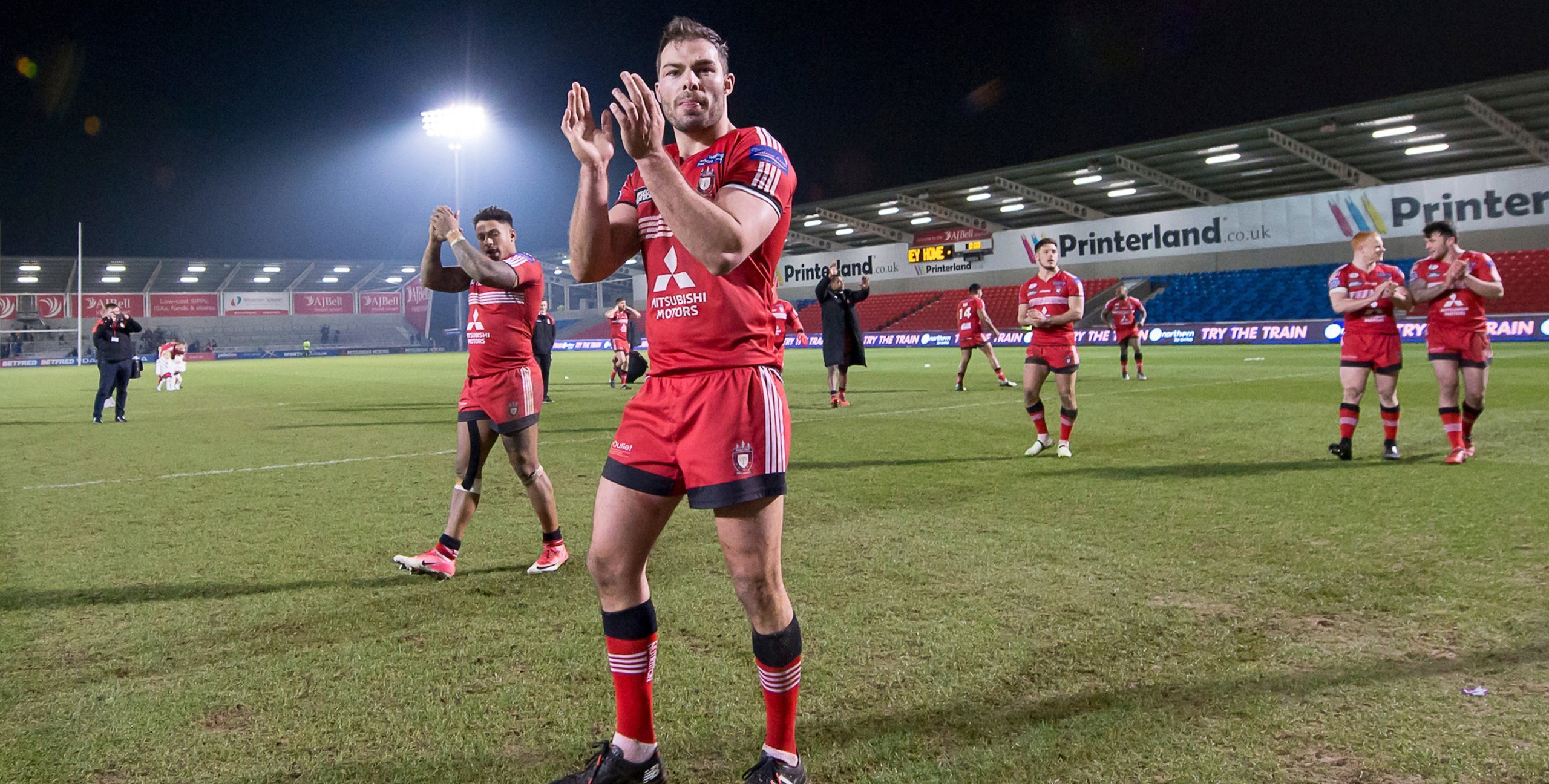 It was in the close season, shortly before Christmas last year, that the decision to have a leadership team, with a joint captaincy, was made by Head Coach, Ian Watson, and it was early in the New Year that Mark Flanagan was given the news that he, alongside Lee Mossop, was to be one of the pair.
Flanagan, sponsored by Sparta Lightning Services, said: “Ian called me into his office to explain what he was considering doing. I was really pleased and thought the it was a really good idea.
Having been vice-captain over the previous two seasons, he was not absolutely surprised to learn of his inclusion in the group, but nor was he at all disappointed at not having been singled out as sole captain of the side.
“We have a wealth of leadership talent within the squad and Ian thought that this was a way to tap into it, regardless of individual personalities, where the collective voice of the group gives confidence to each of us. Last year we had been a bit lacking in this department.
“It’s good that we are all able to bounce off one another and discuss things through. We regularly have meetings with the coaching staff, to discuss, for example, what is going to be happening in training over the next month, so that we can support this.
“This, we can then filter down through to the rest of the squad, so that the coaches get the best out of us all.”
Now, as we come to the end of the regular season, Flanagan is able to look back and assess the impact that the arrangement has brought.
“Over the course of the season, as a team, we have had to handle a bit of adversity which I think we did well. We were able to put it into some context, and relay the thoughts of the coaching staff, so that everyone in the squad had a full understanding of the situation.
“In addition, with having a leadership group, as opposed to a single captain, it helps breed leadership and responsibility throughout the whole group. It is apparent to the whole squad that the three of us are accountable for our actions, and this sets the marker for everyone else to measure up to that.
“Hopefully when the three of us have retired, we will have set the standard for the younger members to continue the culture we have started, and then pass it on to the next generation of players coming through.”
In his role of vice-captain Tyrone McCarthy has his own specific areas of responsibility, whereas for Mark and Lee they share the same role, in tandem.
“We are both heading up the captaincy together on the field, so we both speak to the team when we have scored a try, or leaked one, and then try to inspire the group by our own example. We also have to have words with the odd individual, when that is needed, or perk the lads up at other times. These are things which are more effectively done by two rather than just one person.
“Leading the team out at the start of the game is a role we have alternated on a weekly basis, whilst at training the pair of us can put ourselves about in driving up the standards.”
Now, with the team all set to compete in the Qualifiers once again, over the final part of the season, the fact that at least one of the leadership group, Mark himself, has had experience of this competition a couple of years ago, could also prove crucial in helping the group through it.
Watch highlights from the Red Devils last outing against Leeds Rhinos below: 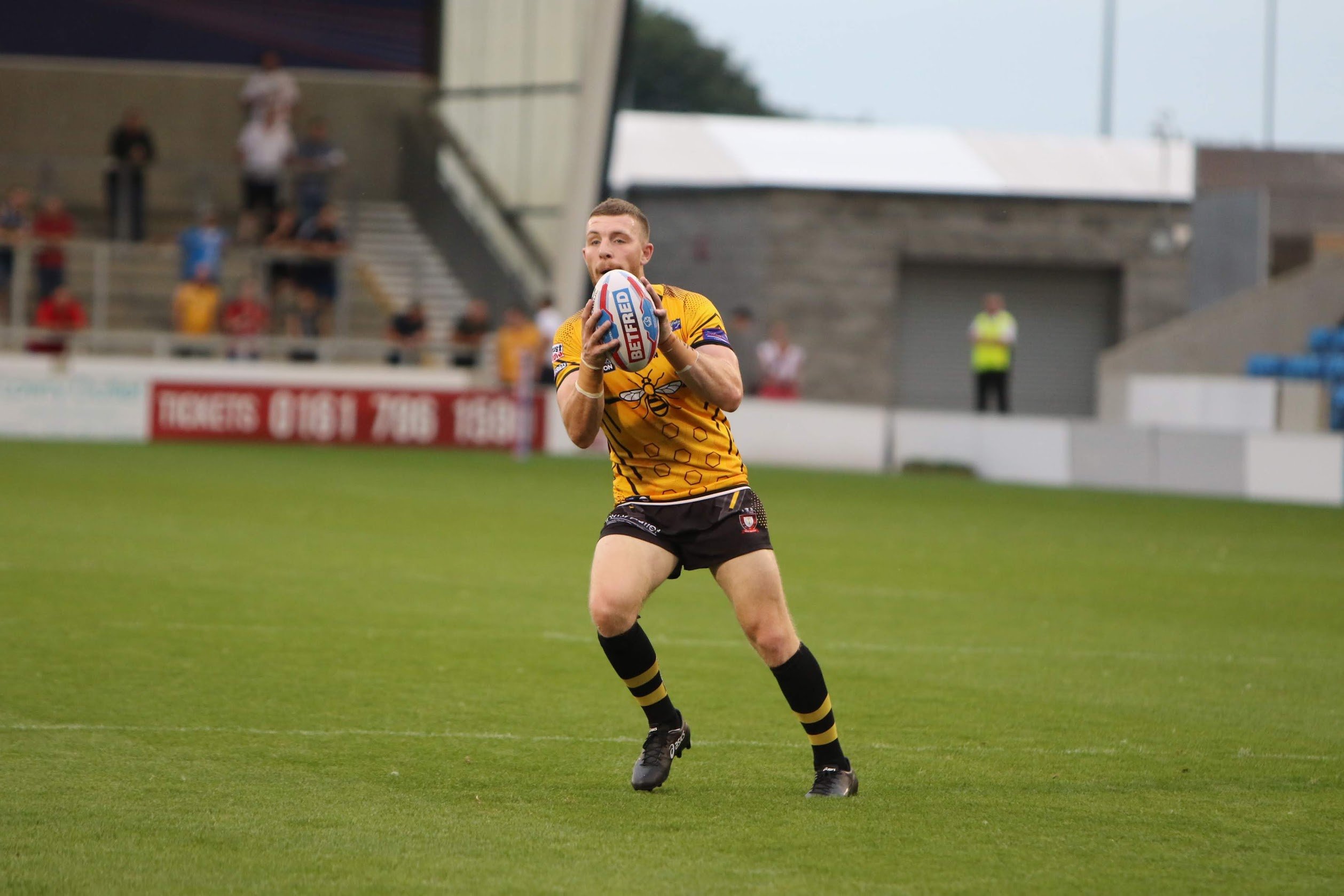 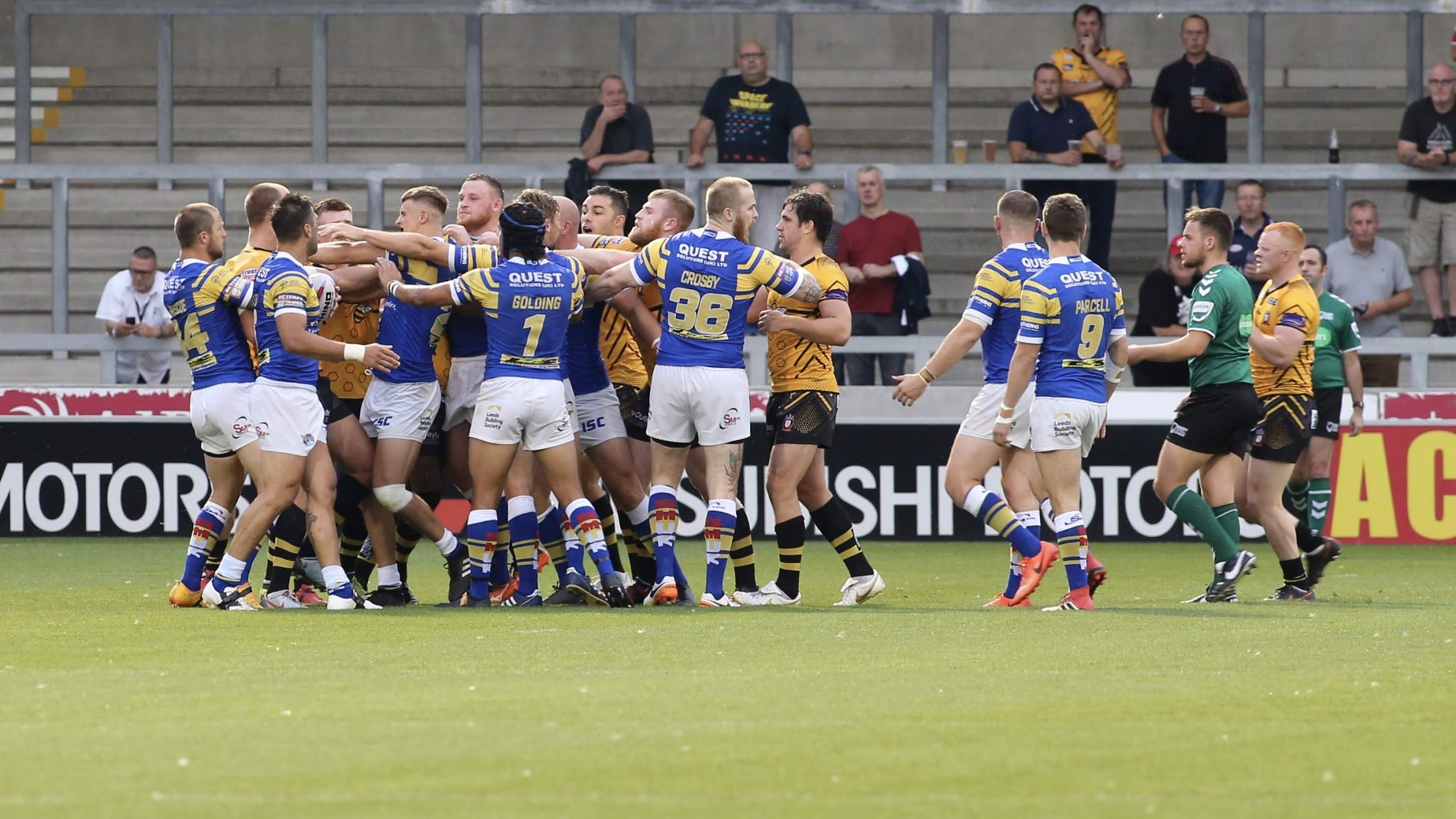 Salford forward Lee Mossop has been given a 0-match penalty notice for a headbutt in the Red Devils recent victory over Leeds Rhinos.
This means Mossop will be available for the opening fixture of The Qualifiers which will be released on Wednesday 1st August at midday.
You can re-live the full game against Leeds and Jackson Hastings’ impressive debut by clicking here.
Or, the highlights are available below: 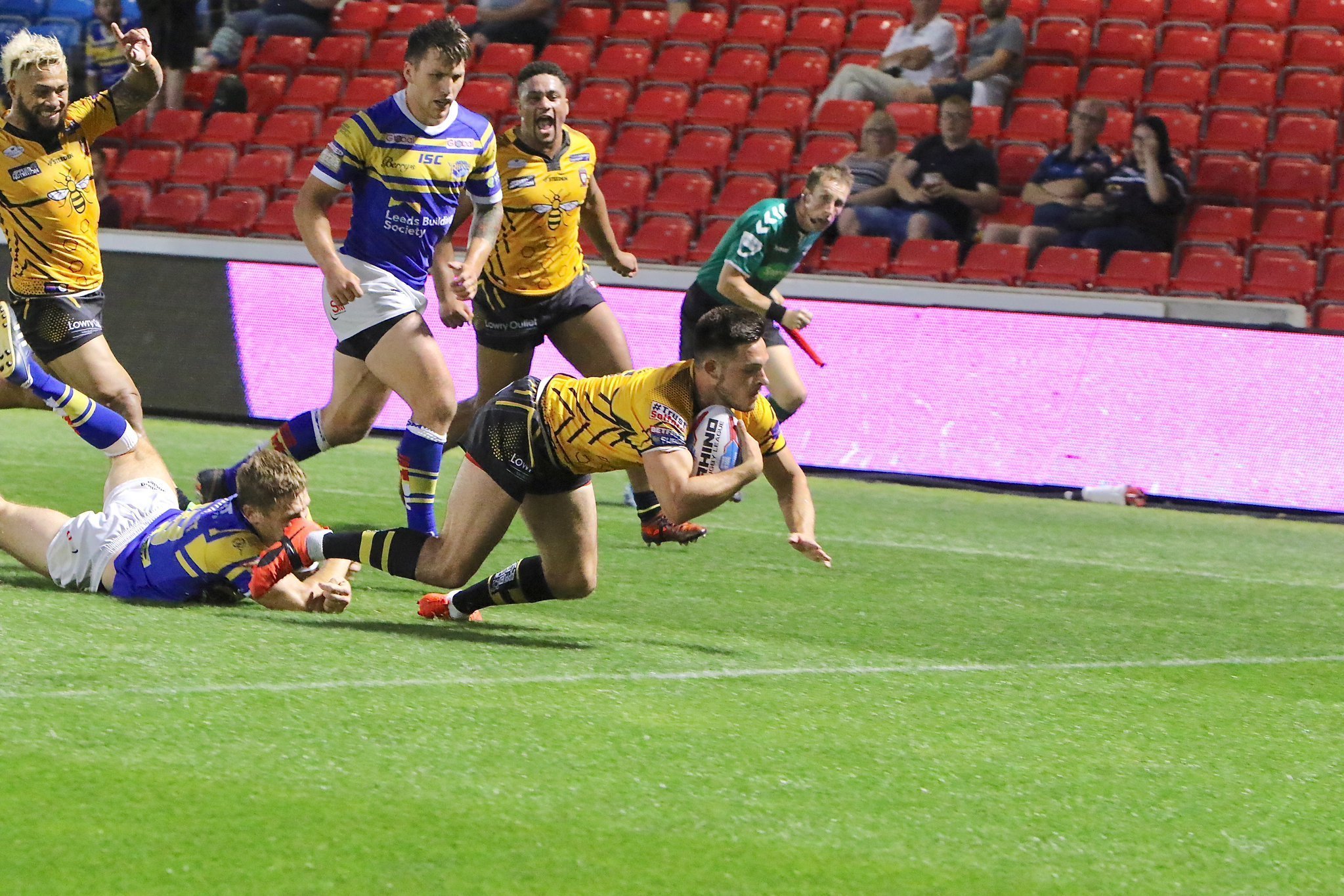 Niall Evalds returned to the AJ Bell Stadium for the first time in almost three months and was delighted to see the Red Devils overcome adversity to beat Leeds Rhinos for just the third time in the Betfred Super League era.
Evalds, sponsored by The Dog & Partridge, said: “We were pleased with the performance particularly given all the adversity we faced with Lee Mossop getting sent off and Jackson Hastings having to go off after twenty minutes.
“It was a tough stint. Leeds play fast as they always do with a lot of offloading, so our defensive effort was outstanding you know we clung on in there.
“There were times in which we fatigued, and Leeds were looking good so but yeah I thought we showed great determination to hang in there.
“We played pretty smart as well kicking the ball out when we needed a rest and I thought we played well overall.”
Niall Evalds also discussed his return from injury, crossing for a double against Leeds Rhinos and the upcoming Qualifiers campaign all of which can be seen on Salford Red Devils TV.
Watch the full post-match interview below:

Head Coach Ian Watson was thrilled with the resilience his side displayed as they overcame Leeds Rhinos for just the third time in the Betfred Super League despite spending sixty minutes with twelve men.
Watson said: “The boys have been goods all the way through the season they’ve always been on the same page alongside what the Club has been going through and the situations we’ve faced but they’ve stayed really strong as a group.
“Even when we’ve lost they’ve come in trying to improve and wanting to get better and I think that resilience showed when we went down to twelve men with how hard they worked for each other.
“We just need to build on that now and take it forward.
“When we complete sets we’ll cause any team issues and that’s what we did. If you look at our games when we complete sets, we normally win games – that’s the key for us.”
Watch Ian Watson’s full post-match press conference below where he also discusses the impressive debut of Jackson Hastings, the imminent arrival of Joey Lussick and how he is expecting some players to return from injury for The Qualifiers.
Full video below: