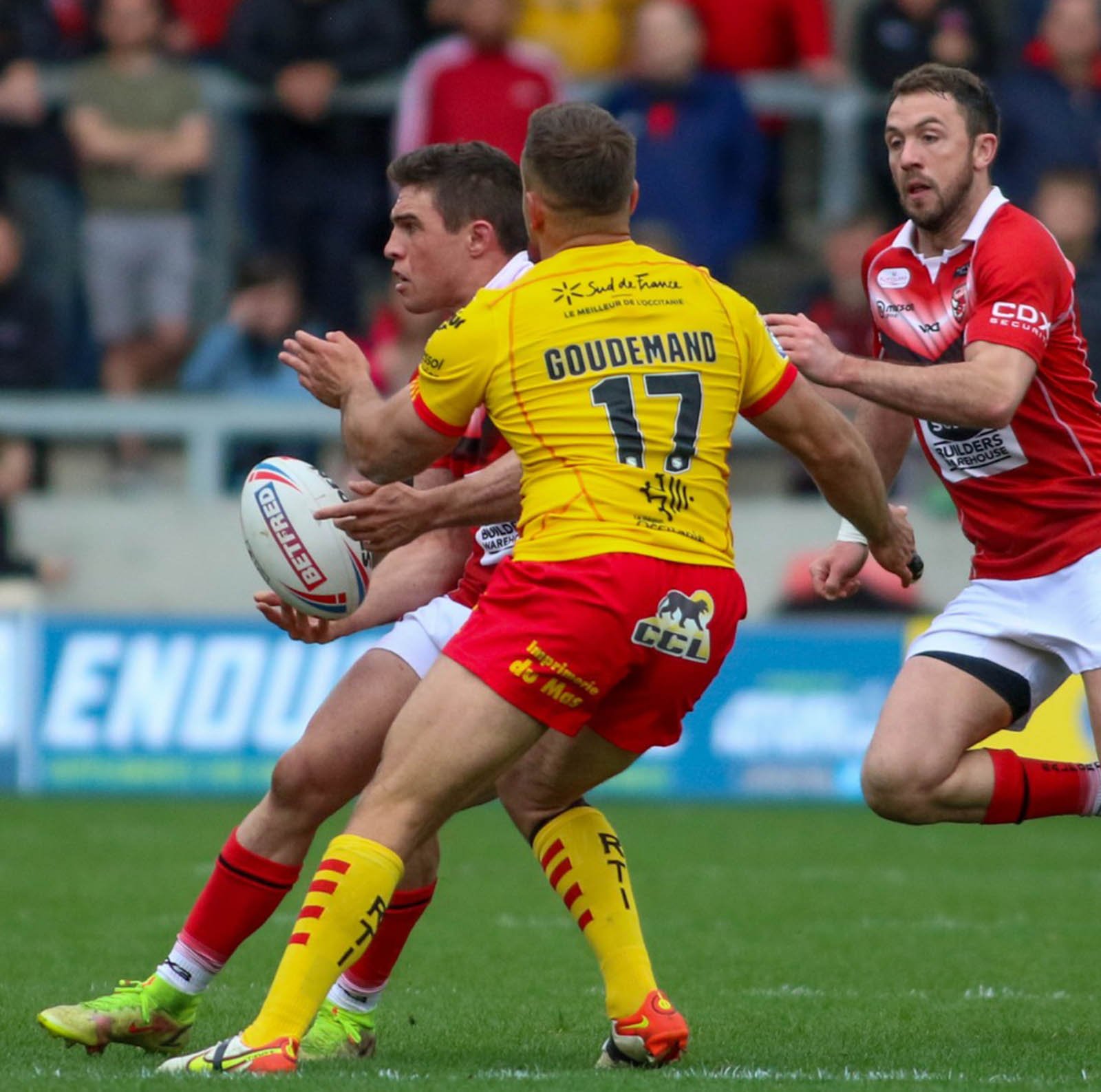 Returning to the A J Bell for only their fourth home fixture of the season, the Salford Red Devils will undoubtedly have been hoping for a turnaround in fortunes after three successive away fixtures in which they had come out second best, when they took on the Catalans Dragons, in Easter Monday’s encounter.

Unfortunately, on the day, this did not turn out to be the case, and the visiting Frenchmen returned home to Perpignan with the two league points to promote further their Super League title aspirations.

That seemed far from likely in the opening stages however, as Salford opened the game with aplomb, dominating possession and turning their most advantageous field position into points, with the first of their tries coming in the fourth minute from Ryan Brierley’s kick over the line, to which Deon Cross won the race to ground.

Indeed, the visitors had really looked at sixes and sevens during that opening onslaught, conceding three set-restarts and a penalty, but once the Red Devils had put in their end-of-set kick after the restart, the visitors began to enjoy a share of possession, and chalk up scores of their own.

What will have disappointed the home fans particularly was the way in which Salford contributed to their own downfall, with unforced individual errors, a number of which led directly, or indirectly, to the Dragons’ six tries, all of which were converted.

Two back-to-back penalties, both towards the end of sets-of-six, set up the visitors for their first, on nine minutes, and then, nine minutes later, they forced a goal-line drop-out, which was followed by their being awarded two further penalties, one of which came on the last tackle of their set.  That was more than enough possession for them to go over again and double their score.

The error, which will have caused most annoyance in the Salford ranks, however, was from a penalty awarded to the Dragons at a scrum for the Reds failing to have secured the ball in readiness to feed it in. The shot-clock sounded, while they were still recovering it, and, from the ensuing penalty, Catalans rang up their third try to bring a 6-18 half-time score.

Twelve points is by no means a match-winning lead and there must have still been hopes of a resurgent home side overturning this, particularly against an opposition depleted by a sin-binning, immediately before the interval.  Far from that, however, it was the twelve-man French side which opened the scoring, following a Salford handling error close to their own line, with the ball firting out into the grateful hands of Whitley with the line at his mercy.

It was not until the sixty-fifth minute that Salford were able to add to their opening score, with their second coming after Marc Sneyd had instigated it with one of his favourite chip and chases, which so used to delight spectators of our Youth team, back in the late noughties.  Brierley regathered before putting in a kick ahead of his own for Sio to add to his growing number of tries for the season.

This, however, was merely sandwiched between two further tries by the visitors, the final one of which came as a result of yet another unforced error, this time an incorrect play-the-ball, which gave the Dragons possession to notch one more.

Standing up to a side as big and physical as the French side is, is a considerable task, particularly with the spate of injuries currently plaguing the Red Devils.  The effort they put in to doing this was tremendous, and the go forward provided by Sam Luckley was significant, as was that of the returning Kallum Watkins, in the unaccustomed role of second row following his introduction off the bench shortly before half time.  With the return eventually of others, that effort will hopefully be turned into victories. 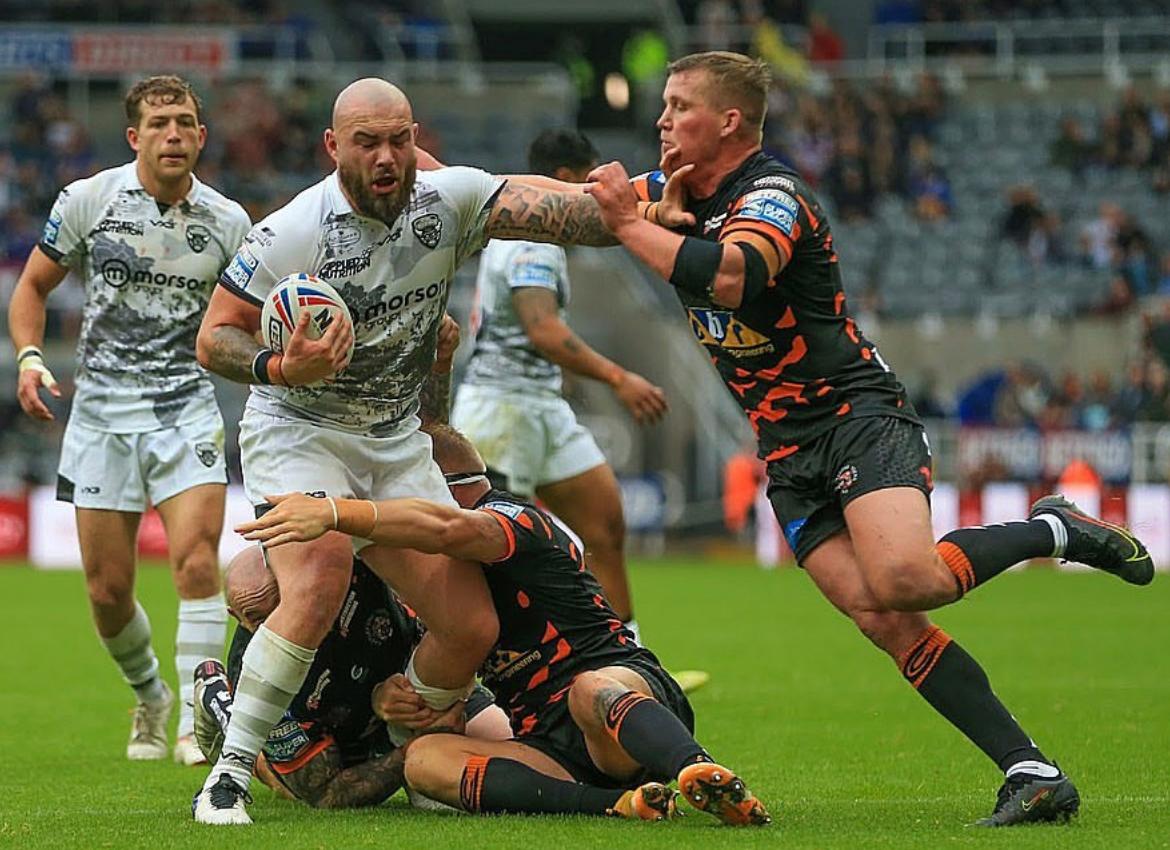 Salford Red Devils are delighted to announce that Sam Luckley’s contract has been extended, keeping him at the club until at least the end of the 2022 season.

Luckley, who started his career at Newcastle Thunder, linked up with Salford ahead of the 2021 season and has put in some solid performances in a Red Devils shirt.

The Scotland international spent some time on loan at Betfred Championship side Swinton Lions this season, which was beneficial to his development.

Speaking on his contract extension, Luckley said: “I’m over the moon that the club have decided to extend my stay for another year, I’ve loved every minute of my first season in Super League.

I’ve learnt so much and developed a lot in my game and I believe at this point in time staying at Salford will help me develop further. Despite some of the results from the last season, I believe Salford is a club on the up and I’ll do all I can to help get this club where it needs to be.”

Director of rugby and operations Ian Blease added: “Working along with his agent, keeping Sam at the Red Devils for another year and hopefully for longer is a great move for us as a club and Sam as a player, as we look to develop him further as a player and a person.

He leaves everything on the field every time he plays and has a strong maiden season in Super League. Sam is one of the youngest players in our squad, so he can only get better from here.”

Join Luckley in 2022 by purchasing a Season Ticket at an early bird price. Tickets can be purchased HERE.