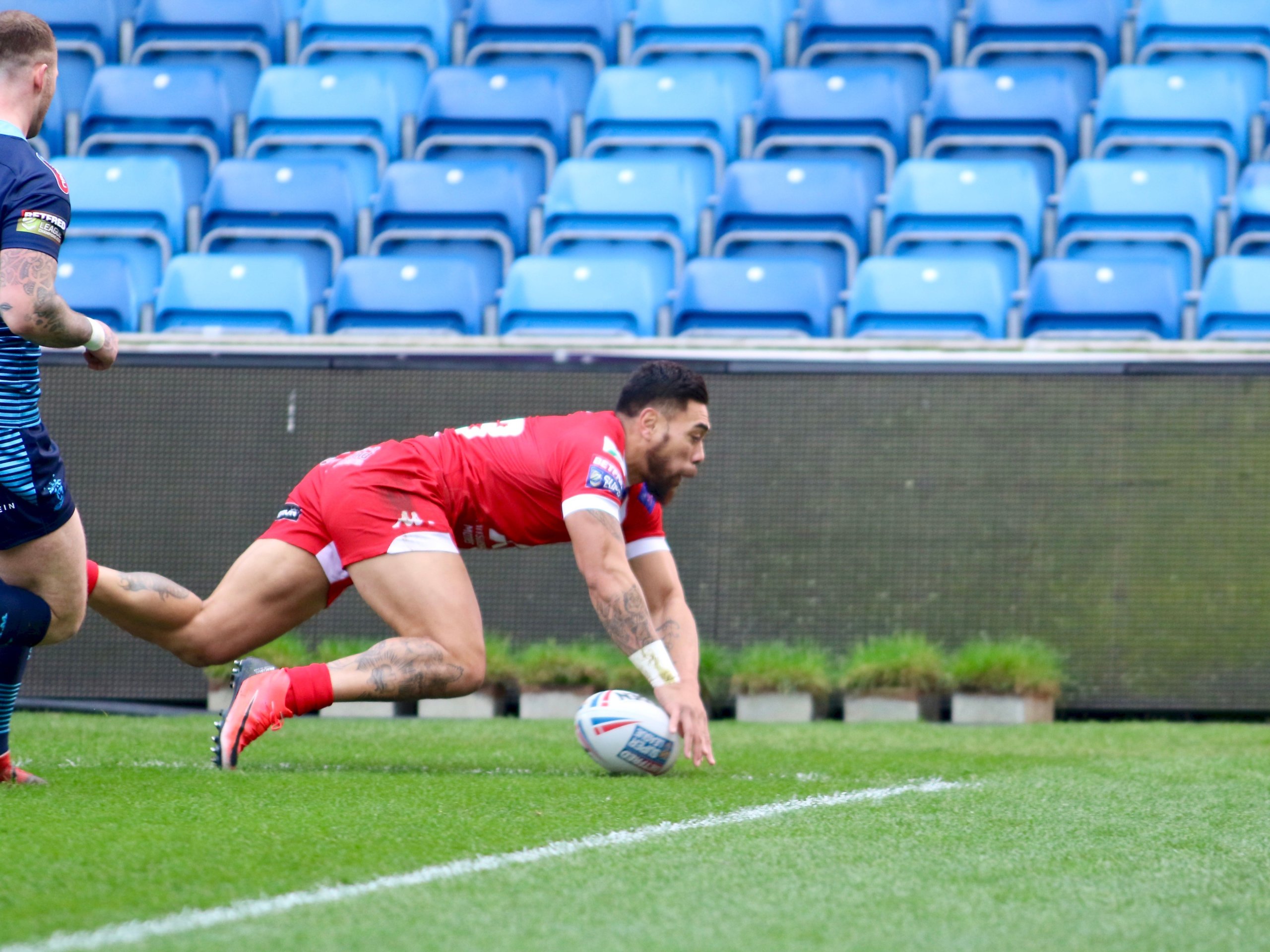 Salford Red Devils fell to defeat in their second pre-season fixture of 2019 against Wigan Warriors at the AJ Bell Stadium. However, there were still some promising talking points from the game.

Ken Sio made his first appearance for the Red Devils since his off-season move from NRL side Newcastle Knights and was one of a few standout performers for Ian Watson’s side.
It took Sio just four minutes to get onto the scoresheet for Salford as he met Jackson Hastings’ low kick to the corner. The winger continued to impress bringing the ball back from deep within the Red Devils half throughout the game.
Following Hastings and Lui’s departures from the field, Niall Evalds moved into the halves with Sio slotting in at full-back where he looked equally as comfortable. The powerful Australian offers versatility in the back-line with the ability to play full-back, winger and centre which will only benefit Salford throughout 2019.
There is a strong competition for places across the back line with the likes of Jake Bibby, Ed Chamberlain, Derrell Olpherts, Kris Welham, Greg Johnson, Junior Sa’u and Evalds but Sio has certainly put his name forward to start away at Huddersfield in just under a fortnight.

In last week’s talking points, following victory over Swinton Lions, we mentioned the versatility of some of Salford’s key players, one of which was Niall Evalds who moved into the halves. In the defeat to Wigan, the England Knight once again was moved into the halves when Hastings and Lui left the field.
Evalds is blessed with blistering speed and fantastic ball handling ability which made him a handful for the Wigan defence once he moved into the halves. He directly assisted Jake Bibby’s try in the second half before also being involved in the build-up play to Derrell Olpherts’ late score.
While the Red Devils will be looking to Lui and Hastings to occupy the half-back slots throughout the season, Evalds is certainly showing he has the capability to take up the mantle if necessary. Ian Watson even went as far as saying Evalds reminded him of Darren Lockyer, to watch Ian Watson’s full post-match press conference, click here.

The 2019 season will see the introduction of the shot clock – which has been massively successful Down Under – and it was in play for the first time at the AJ Bell Stadium against Wigan Warriors.
Two shot clocks have been installed at the AJ Bell Stadium in the South and North stands. These will countdown to encourage teams to pack scrums and take goal line drop-outs quicker.
Both sides packed down and took goal line drop-outs within the allotted time throughout the game however conversions – which aren’t yet being enforced – did often go over the allotted time limit more often than not.
It will certainly be interesting to see how teams – including the Red Devils – adapt to the new rules and the positive effects it will have on the Betfred Super League.