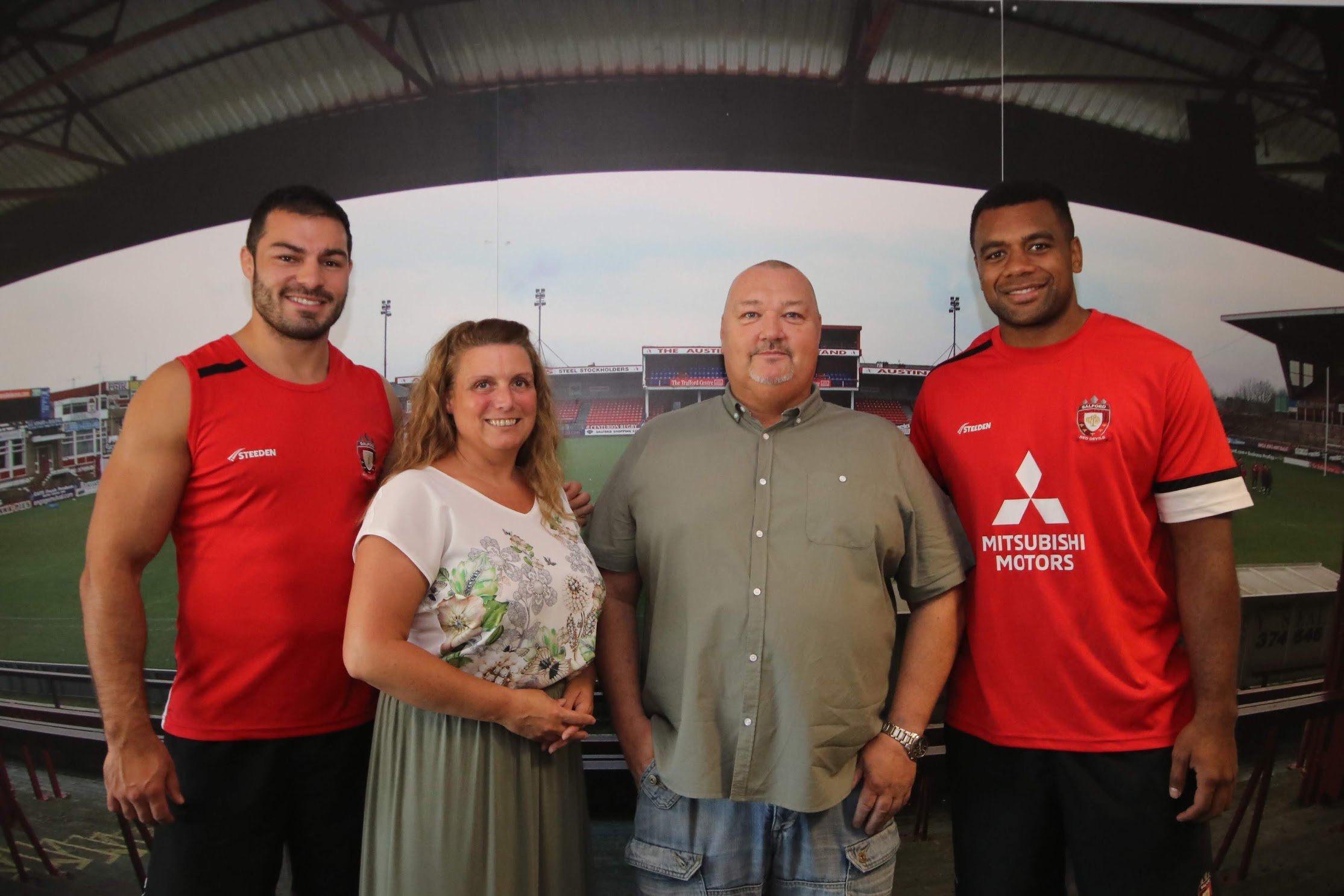 Salford Red Devils are delighted to confirm that Sparta Lightning Services will remain as the player sponsors of Ben Nakubuwai, Mark Flanagan and Ed Chamberlain for the 2019 season.
Sparta Lightning Services – a Salford-based business who employ Salfordians in their work force – proudly sponsored all three players throughout the 2018 season and will continue to partner the Club going forward.
Vince Keenan, Owner of Sparta Lightning Services, said: “After meeting with the Club and getting an insight into how they want to move forward we were more than happy to offer our services
“As my company installs lightning protection systems on buildings the ideal first player to sponsor was Mark ‘Flash’ Flanagan.
“He’s been a model professional since joining the Club and the hard work that he has put in will surely rub off on the younger players. He is one of the more senior players in the squad and has become an integral part of the team at Salford and we’re proud to sponsor him.
Sparta Lightning Services will also sponsor Fijian international Ben Nakubuwai and Ed Chamberlain again for the 2019 season.
Vince Keenan said: “We are delighted to be sponsoring Ben again this season. He’s a big strong running prop-forward and he’s fitted into the team brilliantly since arriving last season.
“I can see Ben reaching new levels this coming season and hopefully he’ll find himself on the scoresheet more as he’s acclimatised to the weather in Salford!
“Ed Chamberlain is another great young player that the Club signed midway through the season. When he came to the Club, I didn’t know much about him or what to expect but I can honestly say I haven’t seen a player fit into the side so well for a long time.
“After seeing him play it was an easy decision to sponsor him. He’s a fantastic goal kicker as well which was massive for the team at the backend of the season and he was brilliant in both attack and defence.
“As a company, we are looking forward to the 2019 season and what it will bring. I love hearing the Salford Reds are rising and the buzz around the Club, players and fans has been lifted with the hard work everyone is doing behind the scenes.”
Salford Red Devils Director of Rugby and Operations, Ian Blease, said: “We’re delighted to have Sparta Lightning Services on board as player sponsors again for the 2019 season.
“They were big supporters of the Club last season sponsoring Mark Flanagan and Ben Nakubuwai from the off and picked up Ed Chamberlain as soon as he came to the Club.
“It’s great to retain sponsorships such as Sparta Lightning Services as we build to the 2019 season and we hope they enjoy the season as proud player sponsors at Salford Red Devils.”
For sponsorship enquiries please E-Mail Adrian.Stores@Salfordreddevils.net or call 0161 786 1590. 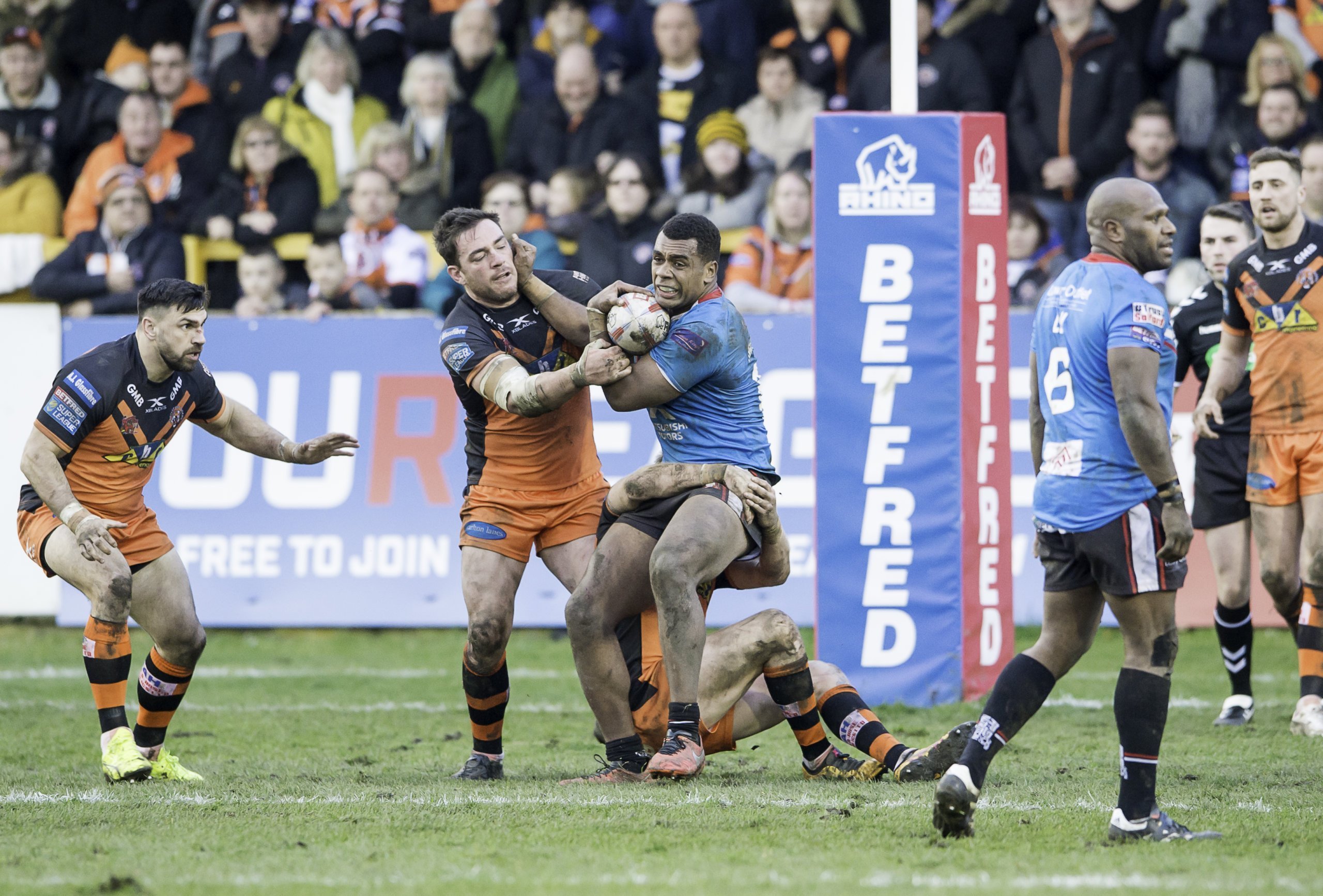 Ahead of tonight’s Betfred Super League clash with Castleford Tigers, we caught up with Ben Nakubuwai who feels the Red Devils forwards need to get on top in the early stages.
Nakubuwai, sponsored by Sparta Lightning Services, said: “It’s going to be really important for us to stamp our mark on the game and show them that we’re here to play and that starts with us forwards.
“If you look at last weekend’s game against Hull KR we were all over them in the first twenty minutes. We just need to keep consistent and do what works well for us and that’s when our middles keep going forward.
“If we can do that and limit our errors we’re a side to be reckoned with.”
Despite defeat last weekend against Hull Kingston Rovers, Nakubuwai maintains that there is still a lot of confidence in the camp and knows the importance of building momentum heading into the 8s.
“It’s really important for us to start stringing some good performances together so when we head into the back end of the year, so we can stay away from trouble.
“I just think we need a bit more composure when calls go against us or we make mistakes. We need to be resilient, not allow our heads to drop and keep the same attitude throughout the whole eighty minutes.
“Everyone will be focused on their jobs and aiming to put in the best performance they possibly can.
“There’s still a lot of confidence in the camp, we’re staying positive and focused on the job at hand.”
Nakubuwai has become a regular feature in the first team since arriving from Gold Coast Titans and is loving life at the AJ Bell Stadium.
“It’s going to be good to play our first game at home for nearly a month. It’s always good to play in a familiar environment and the fans are always terrific at the AJ Bell Stadium.
“It’s my first year in the Betfred Super League and I’m really enjoying the experience so far. I feel like my game has improved and I feel like every week I’m learning new things that are furthering me as a rugby league player.”
The Tigers are in Town, but we’ll roar louder!
Tickets are still available from the Club Ticket Office and over the phone on 0161 786 1570 for this evening’s game.