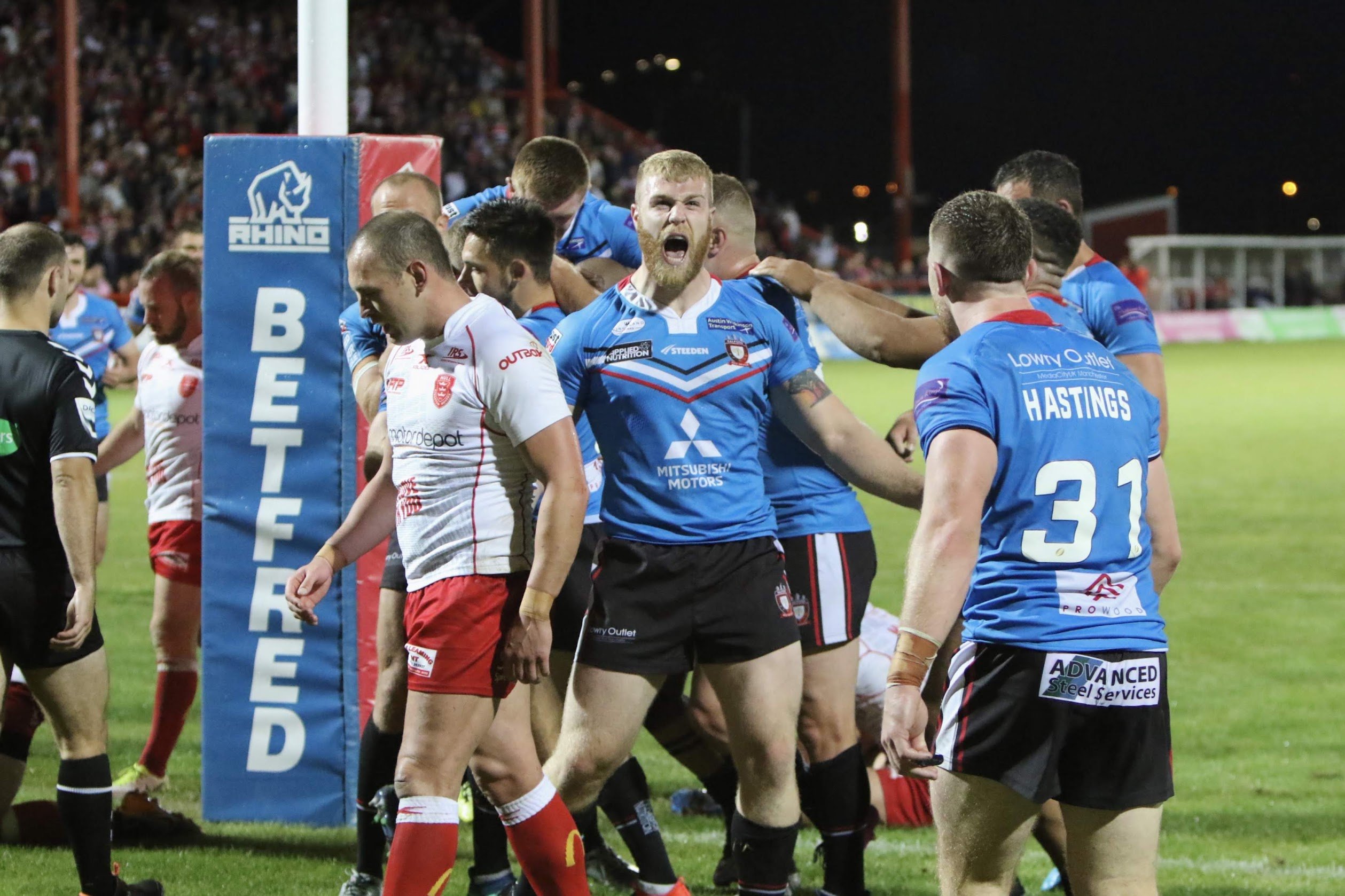 Ahead of this weekend’s huge Qualifiers clash against Halifax – for which Salford will be taking a large away following – we take a look at some interesting facts behind the fixture.
Previous Meetings
While Salford Red Devils did win the last meeting between the sides back in 2015 thanks to a 50-28 victory in the Qualifiers – which you can read more about here – they haven’t enjoyed much luck against Halifax over the years.
https://www.instagram.com/p/BnJjT63F-ri/?taken-by=salfordreddevilsrlfc
Prior to this, the Red Devils hadn’t met Halifax since 2002 in a season where they lost twice against the West Yorkshire side but did earn a 15-12 win at the MBi Shay in April of that season.
The 2001 season also favoured Halifax. Two high-scoring affairs at The Willows saw Halifax win 34-50 and 30-41 in addition to a 30-18 win earlier in the season. In fact, you have to go back to 2000 to find the last time Salford won consecutive games against Fax with the first of those coming thanks to a Martin Offiah drop-goal on 23rd July.
Salford won the first two meetings following the move to the Summer era but would then lose six consecutive matches against Halifax between 1998 and 2000.
Home vs Away
In the build-up to this weekend’s game, Salford Red Devils Head Coach Ian Watson pointed to Halifax’s terrific home form throughout the 2018 season as an indicator of how tough Sunday’s match will be.

???? Head Coach Ian Watson was full of praise for his counterpart at @Halifax_RLFC – Richard Marshall – who he feels has developed a strong side during his tenure.

Halifax have won 11 home games in the Betfred Championship this season including victories over full-time opposition like Featherstone Rovers and Leigh Centurions. A 22-22 draw with Dewsbury Rams and two losses to Toronto Wolfpack – with the most recent coming in Round One of The Qualifiers – are the only blips on this record.
On the other hand, Salford’s away form this season has been a contrast to that of Fax’s home form. The regular Betfred Super League season saw the Red Devils notch just one away victory over Huddersfield Giants in April, but they did win their last match on the road against Hull Kingston Rovers in Round One of The Qualifiers.
The form book – in terms of home vs away – will need to be thrown out the window if the Red Devils are going to make it three from three in this season’s Qualifiers.
Played for Both
Salford prop-forward Daniel Murray has actually featured for both clubs this season following a short loan spell with Halifax at the start of the year. Murray made five appearances for Halifax in 2018 powering his way over for two tries in this time.

72': HALIFAX TRY! And that, should be the game. Daniel Murray crashes over following the initial powerful run by Maher, and the Fax fans are delighted. 22-10.

Last year the two clubs worked a dual-registration agreement which saw a number of Salford players take to the field for Halifax. Murray, Ryan Lannon, Josh Wood and Jake Bibby all featured for Fax in 2017 and have now made themselves regulars in the Salford first team.
Halifax centre Steve Tyrer – who will miss this weekend’s fixture through injury – enjoyed a season with the Red Devils back in 2010. The centre made 20 appearances for Salford crossing for six tries including a hat-trick against Harlequins – now known as London Broncos – in just his third outing.