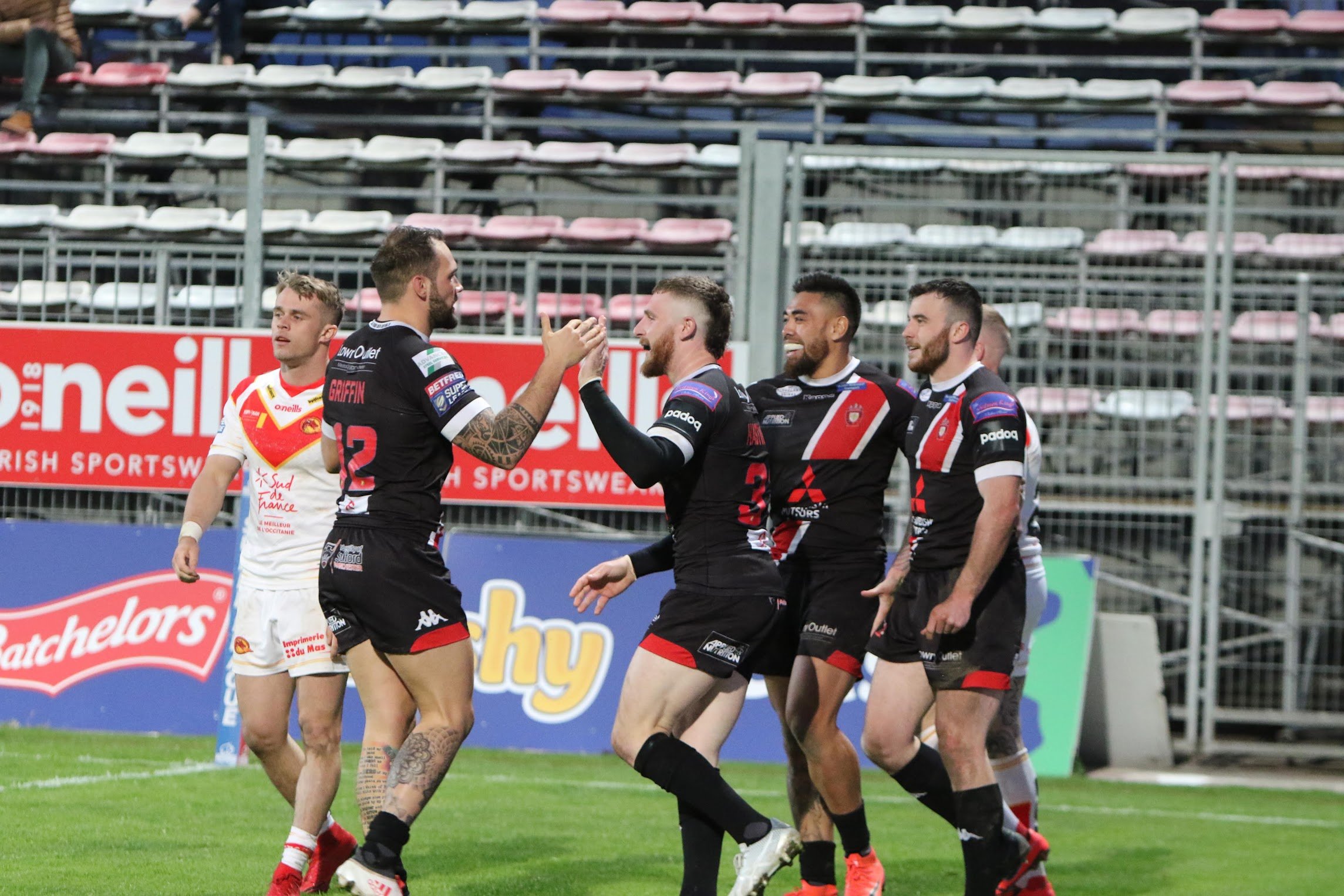 Salford Red Devils earned a huge 0-46 victory over Catalans Dragons to move up to 4th in the Betfred Super League and we take a look at some of the key talking points from the dominant display.

Jake Bibby made his first appearance of the 2019 Betfred Super League season and what an appearance it was. Bibby – who has predominantly featured on the wing for Salford – was named at centre and put on a fantastic attacking display down the left-hand side.
The 23-year-old crossed for two tries and also notched two try-assists. Bibby finished breakaway tries either side of half-time firstly planting down a Jackson Hastings kick before taking an offload and linking up with the halfback again to score just one minute after the interval.

???? Voted as your @SalfordDevils Man of the Match!

Bibby was a constant threat for the Red Devils on the left-hand side and got his hands free on a number of occasions to offload the ball. Two of his offloads led to tries firstly his flick to Niall Evalds who punted the ball down field with George Griffin eventually finishing the move before Bibby returned the favour to Hastings as he flicked the ball out to the Australian for him to find the try-line.
The centre’s inclusion came about due to an injury to Junior Sa’u who had been ever-present up until this weekend. Bibby’s performance has emphasised the strength in depth in Ian Watson’s squad particularly in the centres alongside Kris Welham, Junior Sa’u and Ed Chamberlain.

Throughout the 2019 season so far, Head Coach Ian Watson has continuously made it clear that defence will win Salford Red Devils games, and this is something they have been working hard on which has been evident in the opening weeks of the season.
Salford Red Devils nilled London Broncos in Round Two of the 2019 season and this was the first time they had kept a team scoreless in the Betfred Super League since 2006. They also went on to keep Hull Kingston Rovers scoreless in the second half of their recent meeting which allowed a memorable comeback at KCOM Craven Park.

That resilient defence continued this weekend as the Red Devils managed to keep Catalans to nil in a fantastic performance. In the second half, Catalans did earn a number of repeated sets on the Salford line, but Ian Watson’s men stood firm and denied the Dragons.
It is extremely difficult to keep a side scoreless particularly away from home. The Red Devils will no doubt take confidence from this and be looking to carry this dogged defence into next weekend’s fixture against Castleford Tigers.

It may be too early in the season to start discussing ‘form’ however one thing that is clear is Salford Red Devils’ improvement on the road in the early stages of the 2019 Betfred Super League season.
Last year, the Red Devils won just one away game in the Betfred Super League and they have already trebled that tally in 2019. They earned yet another away victory against Huddersfield before an impressive comeback win against Hull Kingston Rovers.
https://www.instagram.com/p/BuzH4mhnoh9/
However, a 0-46 win over Catalans in Perpignan is certainly the most impressive victory so far considering the Red Devils hadn’t come away from the south of France with two points for eight long years.
This form has been helped by some brilliant travelling support from the Red Devils faithful at Huddersfield Giants, Hull Kingston Rovers and Catalans Dragons. This is something Ian Watson eluded to in his post-match press conference at the Stade Gilbert Brutus.

Off-season signing Adam Lawton made his Betfred Super League bow for the Red Devils this weekend at Catalans coming off the interchange bench in the second half. Lawton had spent the last month on loan with Betfred Championship side Rochdale Hornets for whom he powered over for three tries.
While Lawton didn’t cross for a try, he immediately settled at the top level and didn’t put a foot wrong. Catalans had begun to apply a lot of pressure to the Salford line as Lawton entered the fray, but the former Widnes man stood strong and defended a number of goal line sets to help keep the Dragons out.

Lawton will be looking to push for a regular spot in the Salford side throughout the 2019 season and there is no question that the big man will cause issues for Betfred Super League defences with ball in hand.

Tickets for Salford Red Devils next fixture against Castleford Tigers at the Mend-A-Hose Jungle on Sunday 17th March are now available from the Club Ticket Office and over the phone on 0161 786 1570. For ticket and coach details, click HERE.
Salford Red Devils next home fixture sees them welcome Wigan Warriors to the AJ Bell Stadium on Sunday 24th March and you can purchase tickets from the Club Ticket Office, over the phone on 0161 786 1570 or online HERE. For ticket prices, click HERE.