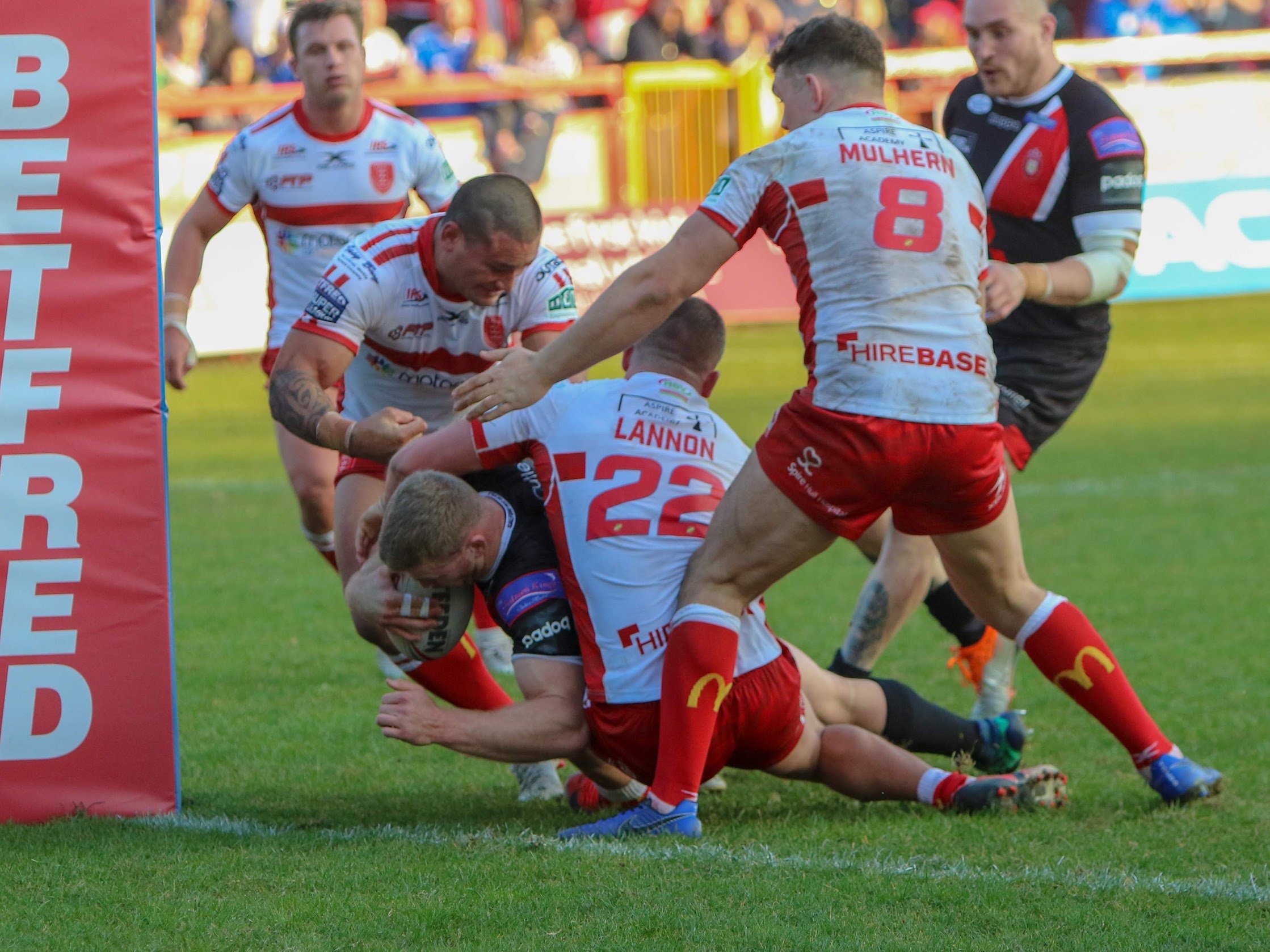 Salford Red Devils made it three wins from four in the 2019 Betfred Super League season with a remarkable comeback victory over Hull Kingston Rovers at KCOM Craven Park and it certainly threw up some interesting talking points.

The biggest talking point from the win over Hull Kingston Rovers was, of course, the nature of it. Salford Red Devils found themselves 22-8 down at half-time only to go on and earn a memorable 22-24 victory at KCOM Craven Park.
There were many impressive facets to Salford’s comeback but the key to their success was a resilient and improved second half defensive display. The Red Devils managed to keep to Rovers at bay throughout the whole of the second half and this is now the third time this season that Salford have kept a side scoreless for a full forty minutes.

On the other hand, the Red Devils retention of the ball improved massively in the second half as Ian Watson’s men cut out the errors and were much more sensible with ball in hand. This paid dividend as the half went on with Salford getting more attacking opportunities and eventually taking the chances that came their way.
There was a stark contrast between the Salford team from the first half to the second half and Ian Watson will be looking to ensure it’s the side that went out for the second half who turn up on Thursday evening against St Helens.

George Griffin moved up from the interchange bench to loose-forward for this weekend’s win over Hull Kingston Rovers and it was an inspired change from Head Coach Ian Watson as the 26-year-old put in a phenomenal 80-minute display.
The loose-forward, who moved into the back-row, was an absolute rock in defence making a massive 50 tackles against Hull Kingston Rovers, this was 18 more than any other Red Devil. Griffin also took 13 carries and was a constant thorn in the side of the Robins in both defence and attack.
Head Coach Ian Watson said: “For him to do eighty minutes like that and move to the right back-row and make an impact there like he did is a massive credit to him.

First games of the season

Along with Griffin moving into the starting line-up, Daniel Murray and Tyrone McCarthy were both named among the interchanges for the first this year and both forwards made strong openings to their 2019 Super League campaigns.
McCarthy has waited patiently for his first opportunity of 2019 to come and he certainly took it with both hands against his former club – Hull Kingston Rovers. McCarthy was solid in defence and certainly lifted the team on his entrance to the field.
https://www.instagram.com/p/BuPKj_unJGn/
Murray entered the field in the second half and immediately took it to the Hull Kingston Rovers forwards with some solid defence and strong ball carrying throughout. In fact, the 23-year-old took the carry leading up to both Derrell Olpherts’ and Ken Sio’s tries. Murray has continued to develop year-on-year with the Red Devils and that shows no signs of stopping in 2019.
Both Murray and McCarthy will be hoping their performances have put them in line for a position in the team for Thursday evening’s clash with St Helens at the AJ Bell Stadium.

Josh Jones was – once again – a standout performer for Salford and his he managed to power his way over in the first half for his third try in his last three games now crossing against London Broncos, Leeds Rhinos and Hull Kingston Rovers. This is the first time he has scored in three consecutive fixtures since 2013 during his time with St Helens.
Ken Sio pulled off a spectacular finish to help the Red Devils fight back and this was Sio’s fourth try in his first four outings for Salford. Despite not crossing last week, Sio has now found himself on the scoresheet against London Broncos, Hull Kingston Rovers and twice in Round One against Huddersfield Giants.

Derrell Olpherts’ try begun the comeback and this is Olpherts’ second try of the season after rounding off Salford’s opening win of the season against Huddersfield Giants earlier this month. With two tries this year, Olpherts has already matched his tally from the 2018 Betfred Super League season.
Finally, Joey Lussick has now scored in back-to-back games for Salford after also scooting over against Leeds Rhinos last weekend. Lussick also scored in similar fashion in last year’s Qualifiers meeting between the teams.

Tickets for our game against St Helens on Thursday 28th February are available to purchase from the AJ Bell Stadium Ticket Office, over the phone on 0161 786 1570 and online HERE.