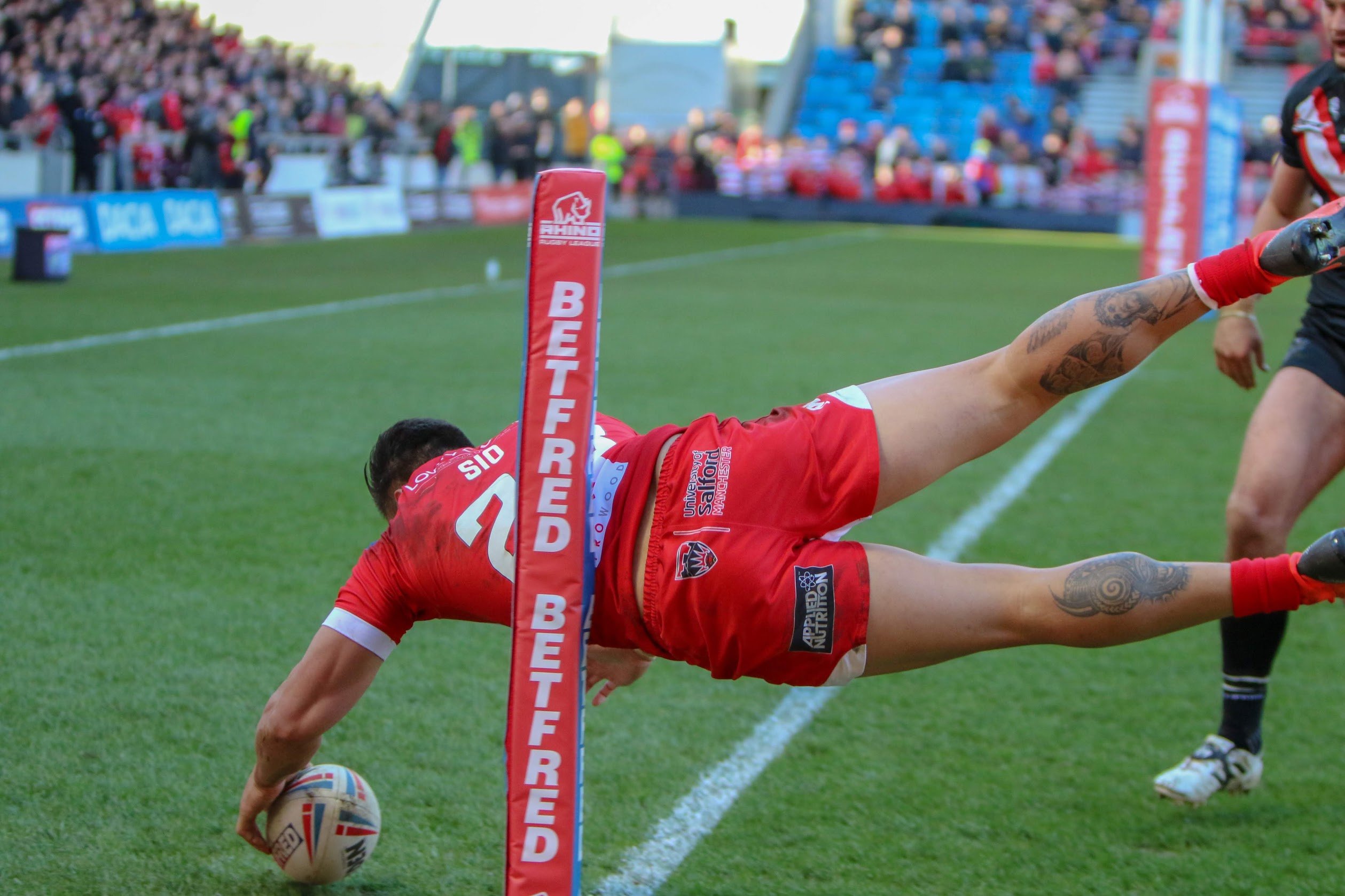 Salford Red Devils earned a second consecutive win to start the 2019 Betfred Super League season with a 20-0 triumph over London Broncos and we’ve taken a look at the talking points from the game.
Defiant defence
Salford kept London to nil on Sunday afternoon and this is the first time the Red Devils have managed to keep a team scoreless in the Betfred Super League since March 2007 with a 10-0 victory over Catalans Dragons at The Willows. The last time they nilled a side came in a 2008 victory over Batley Bulldogs however this was in the Championship.
There were times when the Red Devils were under pressure from London, but some resilient goal-line defence kept the Broncos at bay most notably when Salford defended back-to-back sets on their own try-line in which London went close on a number of occasions.

Full-back Niall Evalds got the plaudits from Head Coach Ian Watson in the post-match press conference as the ‘leader’ of the defence. The Red Devils have only conceded two tries in their opening two games of the 2019 Betfred Super League season and currently have the best defence in the league.
Competitive home debuts
Gil Dudson made his 200th career appearance on his home debut for Salford Red Devils and he put in a big shift in his first competitive game at the AJ Bell Stadium. Dudson arrived in pre-season from relegated Widnes Vikings and has been impressive thus far.

Ken Sio also made his competitive home debut and much like his debut at Huddersfield Giants last week the Australian winger crossed for a try. Sio finished well in the corner after a neat offload from Josh Jones in the second half.
Crowd on the up
Yesterday’s attendance was confirmed as 3236 which sees a rise on the average attendance from the 2018 Betfred Super League season.

As always, the Salford Red Devils supporters were vocal throughout the game and helped the lads to victory.
Salford welcome Leeds Rhinos to the AJ Bell Stadium next up on Sunday 17th February, 3pm kick-off, and tickets are now available to purchase for this game from the Ticket Office, over the phone on 0161 786 1570 and online here.

Salford Red Devils 2019 Season Tickets are still available to purchase from the Club Ticket Office, over the phone on 0161 786 1570 or online HERE. You can spread the cost via Direct Debit payments, for more details, click HERE. Season Tickets will now be at a reduced price on a pro-rata basis.

The next generation of rugby league fans! 🤞