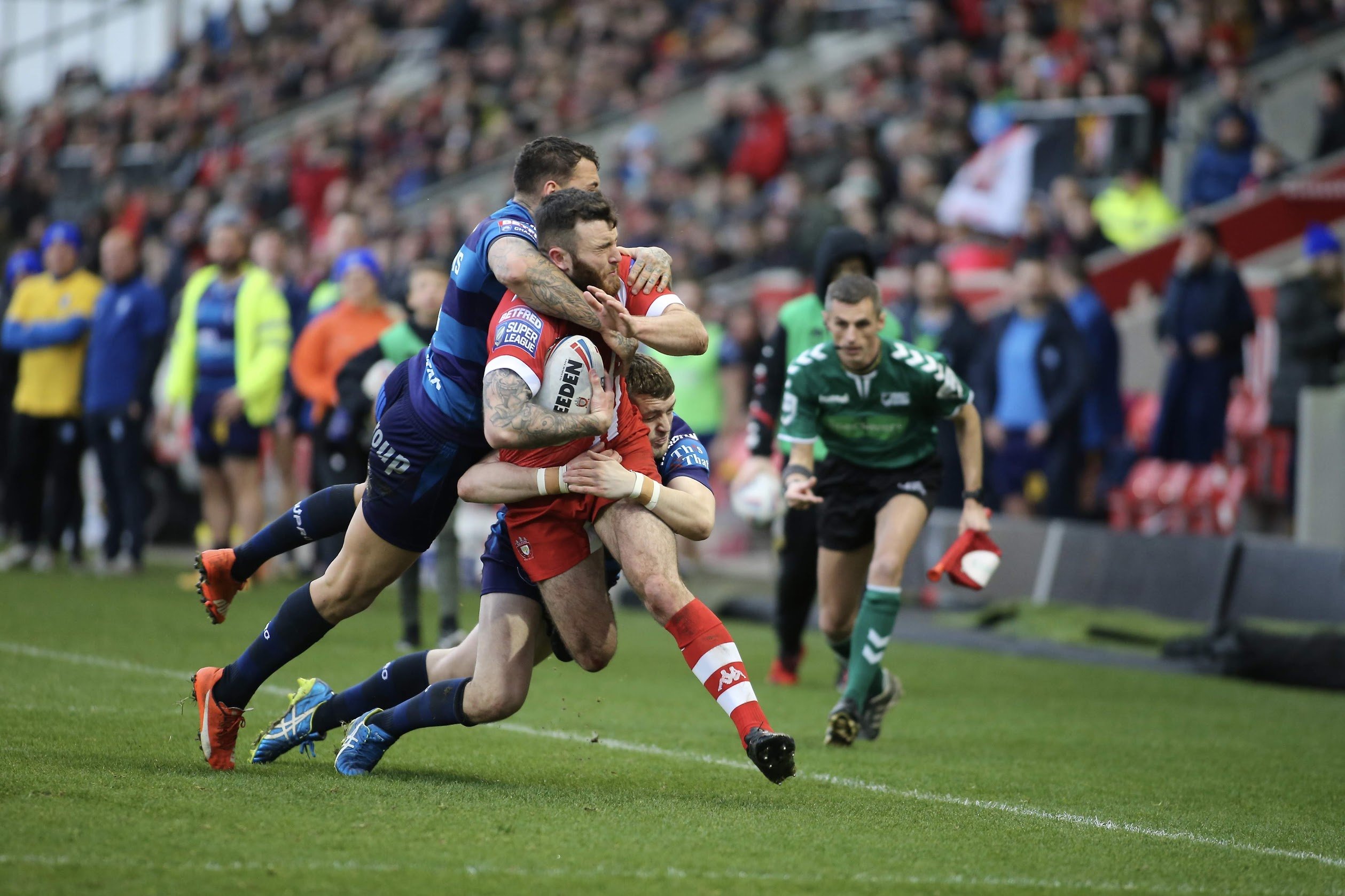 Following Salford Red Devils’ comfortable victory over Swinton Lions in their first game of 2019, we take a look at some of the talking points from the fixture.
Attacking threat
The Red Devils ran in eleven tries in a controlled performance against Swinton and the attacking skill Ian Watson’s men possess was on show throughout. Junior Sa’u, Greg Johnson and Joey Lussick all profited from the attacking display crossing for braces while there was also another five Red Devils on the scoresheet.
Sa’u and Johnson’s tries all came on the back of some quick hands out wide. However, there was a number of occasions when Salford broke from deep thanks to the likes of Mark Flanagan, Niall Evalds, Jackson Hastings and young debutant Connor Davies-Aspey.
Flanagan – who began at loose-forward but went on to operate as half – linked up well with Evalds on a number of occasions which led to some great Red Devils tries. Hastings went through the line in almost identical fashion to his debut against Leeds Rhinos last year to set up Sa’u’s second try.
If the Red Devils can continue to cause problems from all over the field, we could see some more excellent tries throughout 2019.
Connor Davies-Aspey
Salford Red Devils Academy player Connor Davies-Aspey was awarded a one-month trial earlier this week and he certainly made the most of his opportunity against Swinton with an impressive cameo in the final twenty minutes of the game.
Davies-Aspey came onto the field and managed to make three clean breaks. His break in the final ten minutes put winger Derrell Olpherts over in the corner and he was close to finishing the game with two try-assists however pulled the trigger a second too early on his pass to Jansin Turgut just minutes earlier.
Head Coach Ian Watson praised the young hooker in his post-match press conference saying it ‘was great for young kid to come in and do that’. Read more of Ian Watson’s reaction here.
Davies-Aspey has certainly put himself in contention for a place in the squad next weekend as the Red Devils face current Betfred Super League champions Wigan Warriors in a pre-season friendly at the AJ Bell Stadium.
Versatility and depth
After the interval, Ian Watson made four changes to the starting side with Greg Johnson and Derrell Olpherts coming onto the field in place of Ed Chamberlain and Jake Bibby. Both Johnson and Olpherts would go on to score in the second half showing the quality of the Red Devils’ options on the wing this season.
In the pack, the likes of Tyrone McCarthy and Ben Nakubuwai entered the fray and made an impact following impressive forty-minute stints from Lee Mossop and new recruit Gil Dudson in the first half.
Half-back duo Jackson Hastings and Rob Lui both left the field midway through the second half with Mark Flanagan, Joey Lussick and Niall Evalds jumping into the halves. Salford’s try-scoring form didn’t slow down, and the Red Devils continued to look smooth in the absence of a permanent half-back.
The crowd
On a cold January afternoon fans of both Salford Red Devils and Swinton Lions braved the conditions to watch their sides putting together a solid showing for a pre-season friendly with 1798 people in attendance.
Salford vs Swinton is a fixture – that was Head Coach Ian Watson pointed out earlier in the week – doesn’t happen too often anymore so it has become somewhat of a sought-after attraction. Our Betfred Championship visitors brought a strong following down the road to the AJ Bell Stadium this weekend while our loyal Red Devils were in fine voice as always showing the passion for the game in the local area.
Next weekend, the Red Devils host another local side in Wigan Warriors, and we’ll be hoping for a similarly strong turnout.