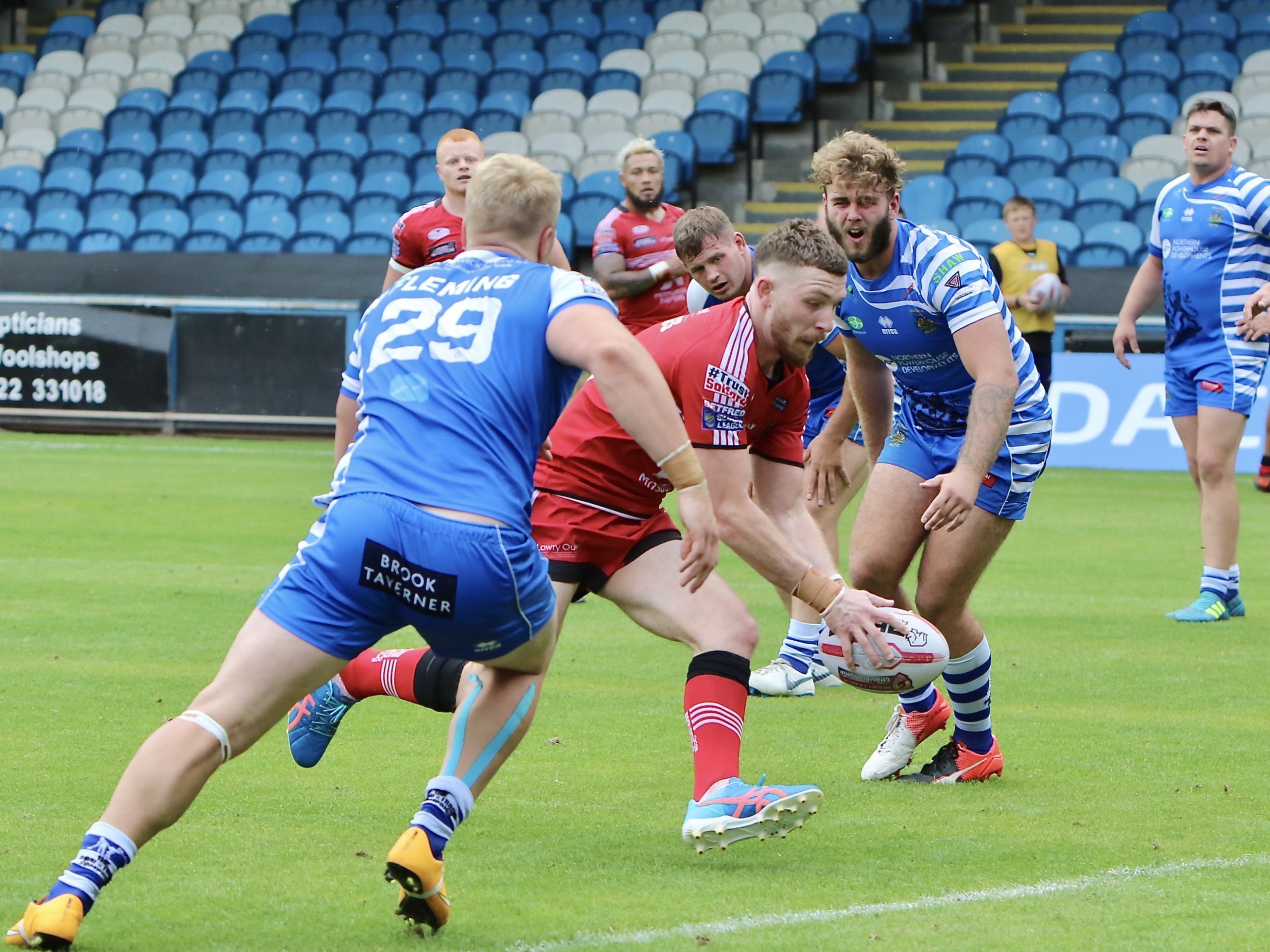 A rampant twelve-try performance from the Red Devils against Halifax saw Salford go clear at the top of the Qualifiers table and here are three talking points.
Defensive effort
It was another resilient performance with Salford conceding just one try at the MBi Shay Stadium. The Red Devils currently have the strongest defence in The Qualifiers conceding just twenty points so far; thirty less than any other side.
Halifax scored first through Sam Wood, but Ian Watson’s men toughed it out for over seventy minutes afterwards without breaking in defence. The hosts put pressure on Salford’s line on numerous occasions as Scott Murrell tried to unlock the defence.
However, the Salford forwards held Halifax up short on a few occasions while the outside backs covered any threats out wide from the Fax dangermen.
The Qualifiers could very well come down to points difference this season and with Salford’s stern defence being on show for the first three rounds this puts the Red Devils in good stead for the upcoming weeks.
Ruthlessness
Despite the Red Devils controlling the game for the full eighty minutes and heading into half-time with the game almost won we saw a ruthlessness from Ian Watson’s men that we haven’t seen for some time.
The likes of Rob Lui, Jackson Hastings, Joey Lussick, Josh Wood and Niall Evalds caused Halifax problems in attack throughout. Once Hastings scored the first try, Salford’s momentum just built throughout with a number of Red Devils ending up on the scoresheet.
Derrell Olpherts was the main beneficiary of this ruthlessness with Red Devils realising they could cause issues down the left-hand side and Olpherts crossed for a hat-trick. Salford’s attack was in full force until the final minute when Junior Sa’u scored with the last play.

The Red Devils have racked up more points than any other side so far in The Qualifiers and will be looking to take that attacking form into next week’s game against Toronto.
Travelling support
It wasn’t just the players who turned up at the MBi Shay Stadium as the Red Devils travelled in numbers with almost 1000 Salford fans making the trip over the Pennines.
The support was the largest away following since last year’s Ladbrokes Challenge Cup semi-final and the constant stream of noise pushed the lads on to victory.
Thanks to everyone who made the trip.