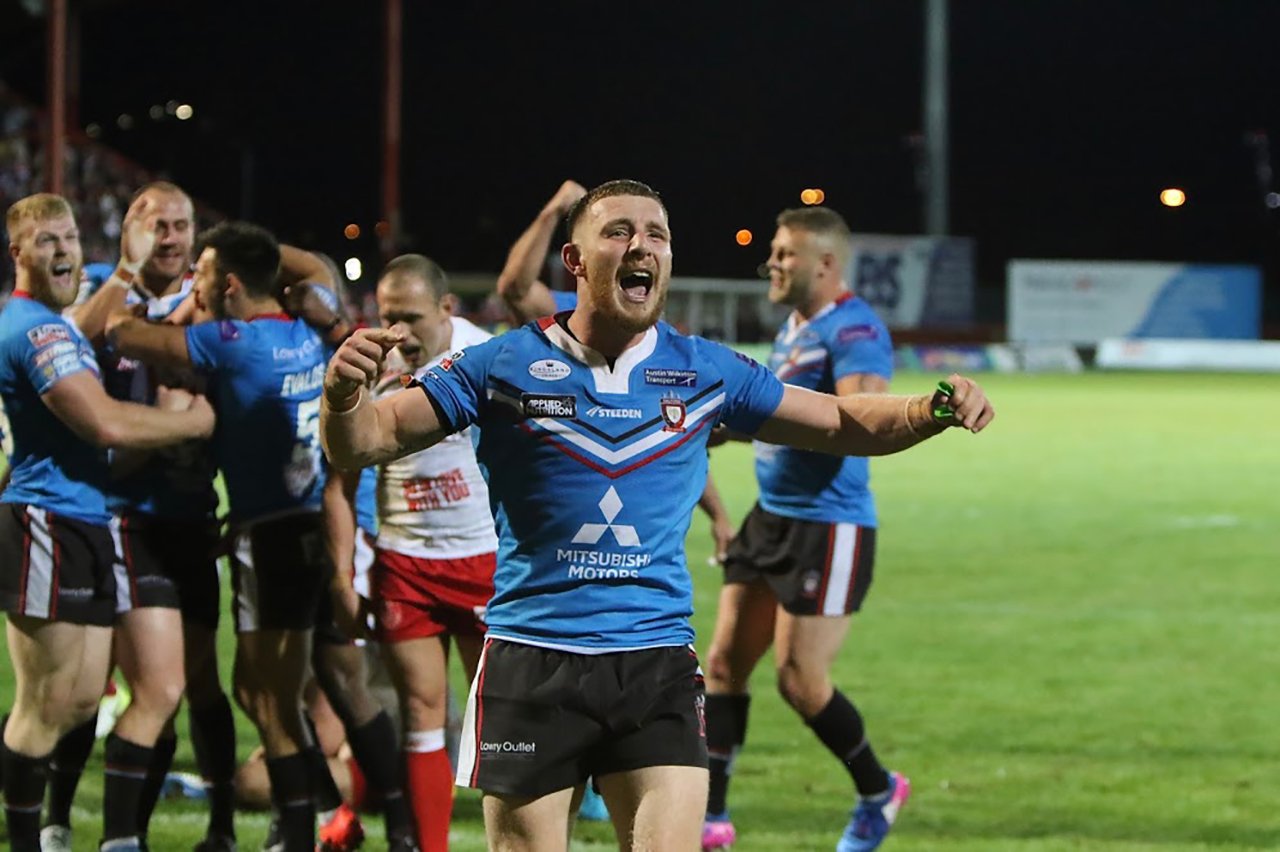 Following last night’s enthralling victory over Hull Kingston Rovers, we take a look at the three talking points in the aftermath of the game.
Off to a flyer
Despite pummelling Leeds Rhinos 38-22 last time out, nobody underestimated the task ahead as the Red Devils made the long journey to Humberside.
Whilst many wrote Salford off prior to kick-off, Ian Watson’s men silenced their critics with a memorable performance at KCOM Craven Park.
It was crucial that Salford started their Qualifiers campaign with a bang and they certainly did so. The Red Devils dominated the tie throughout and scores from Niall Evalds, Robert Lui, debutant Joey Lussick and Josh Wood helped clinch a deserved 10-28 victory and spark euphoric scenes in both the stand and away dressing room.

Salford undoubtedly commenced their Qualifiers campaign in the best manner possible and now head into next week’s showdown with Widnes in full confidence after securing successive victories. The Vikings meanwhile will be looking to end their 17-game winless run after dramatically losing 20-21 at home to the London Broncos on Thursday evening.
Lussick stars on debut
Australian hooker Joey Lussick – who joined the club as a free agent two weeks ago following his release from Manly Sea Eagles – made his long awaited debut in Salford colours and the 22-year-old failed to disappoint.
Not only did the former Australian RU Schoolboy cross for a well-worked maiden try, but he performed impeccably throughout. The hooker linked up well with former Manly teammate Jackson Hastings and full-back Niall Evalds in attack, whilst also adding another dimension to plays with his devastating kicking game – a rare sight for a hooker.

66' – TRY SALFORD! He's in on debut! Joey Lussick throws the dummy and dives over from close-range!

If last night’s showing is anything to go by, Lussick could prove to be one of the club’s most impressive acquisitions in recent times.
New spine in fine form once again
We’ve previously touched on the influence of recent arrival Jackson Hastings linking up with Robert Lui and Niall Evalds during his dazzling debut versus Leeds, but Lussick’s introduction at KCOM Craven Park yesterday really signalled that the final piece of the jigsaw had well and truly been unearthed.
Salford demonstrated an expansive style of Rugby throughout and executed a series of quick combinations between the foursome. This newly found attacking flair has ran parallel to the arrivals of Hastings and Lussick and has seriously enhanced the Red Devils’ spine.
Hastings in particular has extracted heaps of pressure from the shoulders of Lui and has allowed the fifth-eighth to play his natural game. 28-year-old Lui was voted Man of the Match following the triumph over Leeds and excelled once again versus the Robins. Salford’s ‘star man’ provided a moment of brilliance in the 55th minute after latching onto a wayward pass from Chris Atking, before racing ninety-metres to cross for a stunning individual try.

And, you can watch all the tries here ➡️ https://t.co/tVSmowmtBQ pic.twitter.com/ixvpQydwuz

Alongside Lui, Hastings and Lussick have also aided full-back Evalds’ game. 24-year-old Evalds suffered a broken leg in May, but after returning from a lengthy spell on the sidelines, Salford’s marquee signings have linked up remarkably well with the former Salford academy graduate. Hastings produced an exquisite dummy to send Evalds over for the first of two tries versus the Rhinos a fortnight ago and Evalds continued his good run of form at Hull KR.
After Mark Flanagan picked up a short ball from Josh Wood, the experienced forward pierced his way through the Rovers backline before releasing the onrushing Evalds who slid over the whitewash to grab his third try in two games.