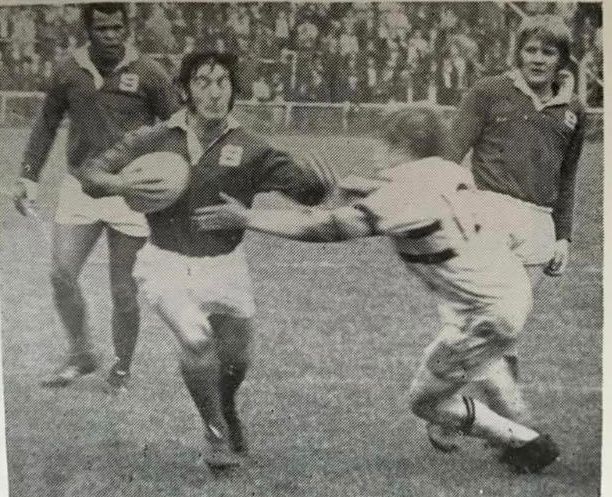 Salford Red Devils have been saddened to learn of the passing of former, back row forward, John Corcoran, on the 2nd August, following a short illness.

John (pictured second from left, above) joined Salford from Wigan St Patrick’s, in 1974, and, although he might have appeared to have been lacking in size for a position in the pack, he more than compensated for this with his energy and endeavour; his hard running and zealous tackling ensured that he played well above his weight.

He made his first appearance from the bench, on the 13 August 1974, in the annual, pre-season charity match against Swinton, for the Red Rose Cup, which he followed up, a few weeks later on 8th September, once again as a substitute, in a home game against Huyton, in the Lancashire Cup.

Although he remained with the club for four years, because of the intensity of competition for places in the team, at that time, John played most of his rugby in the A team.  Nevertheless, he turned out in the first team for a total of forty games, starting in eighteen of them, coming off the bench in the remaining twenty-two, and scoring three tries.  In addition, in September 1975, he went on loan to Leigh, for whom he played a further three games.

His final first team match was against Dewsbury, at The Willows, on the 11th January, 1978, and later that year, during the close season, he transferred to Blackpool Borough, where he became a mainstay, and later captain, of their team.  He featured most regularly at loose forward, making the starting line-up on seventy-five occasions, with a further four as a substitute, and scoring five tries.

His final move came in September 1981 to Rochdale Hornets, and during this, his last season, he played a further fourteen games, starting in thirteen of these, and scoring a try.

Our sincere sympathy and condolences go out from everyone connected with Salford Red Devils, to his family and friends, at this particularly sad time.